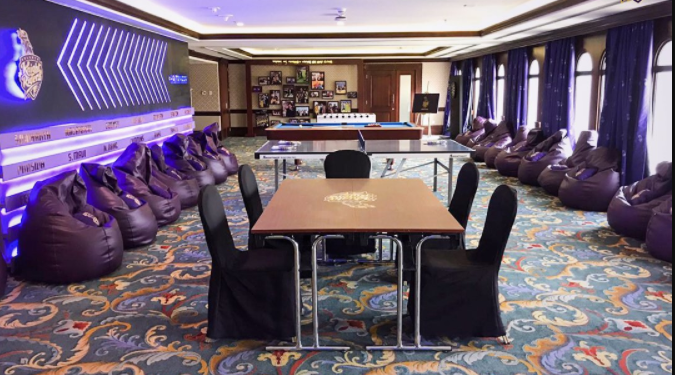 One of the IPL franchise Kolkata Knight Riders releases the picture of their team room in Abu Dhabi ahead of IPL 2020. The Kolkata based franchise reached UAE on August 21.

The 13th edition of the cash-rich Indian Premier League is all set to begin from September 16 having its final match on November 10.

The IPL 2020 was moved out of India due to the rising coronavirus cases in the country. The two-time Indian Premier League (IPL) champions landed in the United Arab Emirates on Thursday to participate in the 13th edition of the cash-rich league.

IPL 2020 has been decided to play on Sharjah, Abu Dhabi, and Dubai where they will host 60 games in 53 days, starting next month. This is not the first time that the IPL will be played in the UAE. In 2014, UAE had hosted the T20 league partially due to the general elections in India.

KKR has roped in Brendon McCullum as their head coach for this season as they look to turn things around in the UAE.

Change in team Sponsorship for IPL 2020:

Mobile Premier League has been officials announced their sponsorship for Kolkata Knight Riders for this year’s IPL. Earlier Nokia plays as its principal sponsor for the team KKR.

Watch the Chat Between KKR CEO and MD Venky Mysore:

Also read: Top 10 Fastest Half-Century in IPL History: Not “Chris Gayle” on Top, Check Out Who Holds No.1 Position