Chennai Super Kings(CSK) skipper MS Dhoni praises young cricketer Ruturaj Gaikwad after his match-winning knock against KKR. Earlier Ruturaj with his impressive knock leads CSK to win against RCB in their second meeting of the tournament.

“We’d seen him in the nets, but then he turned Covid positive and it took him 20 days to get back. Unfortunate, but he’ll remember this season,” said Dhoni in the post-match presentation ceremony in which Gaikwad won his second Player of the Match award on the trot.

“He’s one of the most talented players around. What makes it difficult is he’s not somebody who speaks a lot. So sometimes it becomes difficult for the management to gauge a player. Once he started going in the innings, you could see that he was hitting the ball the way he wants.

“When we made him play the first game, he got out after stepping out. It was difficult to tell whether it was the pressure that made him step out or whether that’s his natural game. One ball isn’t enough,” Dhoni said.

Dhoni-led CSK has been eliminated from the tournament for the first time since 2008. After missing a couple of key bowlers, CSK faces lots and lots of hurdles in the current year’s IPL season.

The three times trophy winners had made it to the playoff in all the 10 seasons it played so far. The 2020 IPL led CSK to script an unwanted record by not being eligible to enter the playoff. CSK holds the bottom spot of the IPL 2020 points table.

“We haven’t performed in the tournament but we felt it’s important to be relevant. That’s what we kept telling the guys. We said you prepare how you want to, but three to three-and-a-half hours during the match, give your best. We are not in the position to qualify (for the playoffs), but there’re plenty of takeaways,” he said. 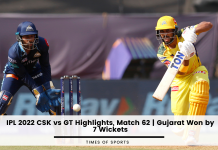