The former Indian Test cricketer and current Bowling coach of the Indian national cricket team Bharat Arun backs India team. Speaking on behalf of the Indian bowlers he states that current Team India players have the capabilities of defeating this combative New Zealand side in its own backyard. India and New Zealand will play two matches series  scheduled to start from February 21. Previously India won the T20I trophy by whitewashing New Zealand and vice versa New Zealand won the ODI trophy by Whitewashing India.

After an eye for eye whitewash series these two will face each other in the test series. Inspite of the India’s best performance, team India lose the ODI series where New Zealand registered an impressive whitewash.

When Bharat interact with Sportstar he states :”New Zealand is a combative side but we have the team to beat it in its backyard. We were without six of our World Cup players.”

“Sometimes, it is not all about winning. It’s about trying out cricketers in different positions and we might lose some matches in the bargain,” he added.

He also claimed that each Indian pacer can take their turn to bowl against the oncoming wind at the Basin Reserve in Wellington which will play a key factor during the match.

“Not one, but each of our pacemen could take turns bowling against the wind.”

“We could also ask the spinner to bowl against the wind and rotate the pacemen from the other end,” said Bharat.

“They have got a world-class batting line-up as well and we have to get through that. But they are the No. 1 team in the world for a reason and we know we have to be on our game to be successful against them,” he added.

He mentioned that “We have reached a stage where every team wants to beat us and New Zealand won’t be any different,”. India is in the top position of the ICC World Test Championship points table and are scheduled to play two test match against New Zealand who holds the sixth position. 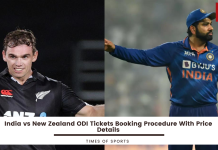