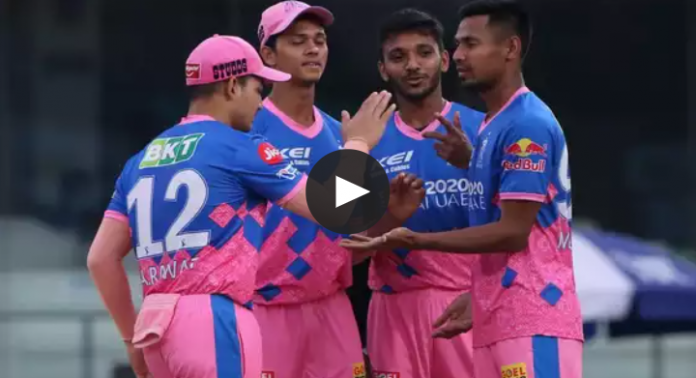 RR vs SRH IPL 2021 Highlights: After altering the skipper SRH gets into play their seventh league match of IPL 2021 season. Both the teams holds the last two position of the IPL 2021 points table.

SRH needs to win the match in order to avoid the points pressure towards the end of the season.

We are going to have a bowl. After a few conversations with guys who have played here, we think it should be a consistent surface. Three changes: Nabi, Bhuvi and Samad are back. Warner, Suchit and Kaul miss out on this one. We know that as a group we need to come together and build on the positive parts.

It has been difficult, but we need to pull together now. This captaincy change is very sudden, so I just need to pick up and make the small adjustments which hopefully will reflect on the result.

The goal for the last half of the campaign is to improve our performances. There are many areas we need to improve, wickets in the powerplay is one. We have to do our best with our resources and it’s important we adjust to the conditions.

The last match we played here was a noon game as well and it’s good to set a strong total. You only look for a good start in the powerplay and build up from there.

Two changes: Unadkat is resting and Tyagi comes in. Anuj Rawat is making his debut in place of Shivam Dube. We just want to keep it simple and express ourselves, see the ball and react accordingly.

Jos Buttler and Jaiswal gets into the crease to lead the RR. While Bhuvneshwar Kumar opens the bowling attack for the SRH.

SRH bowler Rashid Khan in the 3rd over dismissed Jaiswal for 12 runs and makes the early wicket. Skipper Sanju Samson then join hands with Buttler and in pressure to build a healthy partnership which could lead them to score a decent run.

A fine contest was just starting to brew but the experience of @rashidkhan_19 prevails. He bowls a quicker one, it skids and crashes into the pads before Yashasvi can lay anything on it.

As expected this duo makes a strong partnership where Jos Buttler’s involvement left in the upper hand. At the end of the powerplay, SRH scored 42 runs for 1 wicket loss.

This duo continues to make a steady partnership which leads SRH to score 77 runs for 1 wicket loss at the end of the 10 overs.

SRH bowlers struggle to break the partnership. With back-to-back aggressive shots from Jos Buttler SRH scored 146 runs for 1 wicket loss at the end of the 15 overs.

Finally, Vijay Shankar in the 17th over dismissed Samson for 48 runs and breaks the partnership. While Jos Buttler makes his maiden IPL century in the same over.

1️⃣0️⃣0️⃣👏🏾🎆@josbuttler brings up his maiden #VIVOIPL century in just 56 balls (10×4, 5×6). He is the 2nd @rajasthanroyals to get to triple figures this season!https://t.co/7vPWWkMqQ2 #RRvSRH #VIVOIPL pic.twitter.com/Kh3Aa2Du6J

Buttler’s impressive innings finally comes to end while an over left to wind up the innings. Sandeep Sharma dismissed Jos Buttler for 124 runs and restrict the English batsman to score massive off the last over.

With Miller’s six of the final delivery RR scored 220 runs for 3 wickets loss.

Manish Pandey and Bairstow gets into the crease to chase down the target of 221 runs. While Kartik Tyagi opens the bowling attack.

RR needs to pick early wickets as the SRH too loads with quality strikers in their list. But RR fails to pick the early wickets and let SRH to score 57 runs for no wicket loss at the end of the power play.

Mustafizur in the very next over dismissed Manish Pandey for 31 runs and draws the first blood. In the followed over Rahul Tewatia dismissed the dangerous batsman Bairstow for 30 runs. These two back-to-back wickets slow the SRH’s run rate. At the end of the 10 overs, SRH scored 82 runs for 2 wickets loss.

Chris Morris in the following over dismissed Shankar for 8 runs. SRH needs to build a match-winning partnership which could save the SRH’s ship from sinking.

Morris strikes twice in one over 🔥

SRH skipper too loses his wicket soon and walks to the pavilion after scoring 20 runs. SRH starts to collapse as a deck of cards and starts to lose wickets in a regular interval.

At the end of the 20 overs SRH scored 165 runs for 8 wickets loss. Finally RR bags their 3rd victory of the tournament by beating SRH by 55 runs.