From not being India’s first-choice keeper when the Test series began to one of the heroes of India’s 2-1 series win, Rishabh Pant has come a long way in a matter of three Tests and about four weeks.

The 23-year-old wicket-keeper batsman has perhaps seen more highs and lows in his short career so far than most other established international cricketers.

Pant’s batting performance in the Australia series has impressed India batting coach Vikram Rathour. The former India opener said Pant will be an ‘extremely important role’ going ahead for India.

“His role will be extremely important going ahead. We have always believed that he is one of the exceptional players,” Rathour said in an interview with Hindustan Times.

The 23-year-old had a tough run at the international level last year and the Delhi-based player worked hard to become a match-winner for India.

“He had a tough time last year or so. But he has been working hard, training hard. We all believed (that) on his day, he is a match-winner. In the last two games, he proved that. Being a left-hander is definitely an advantage (for the team).

“As far as his entering the XI (purely) as a batsman, the decision will be taken on that particular day when the question arises,” Rathour said.

Pant scored an attacking 97 in the third Test in Sydney. His innings had kept India’s hopes alive of a miracle win but unfortunately, it was not possible after he got out and Hanuma Vihari suffered a hamstring injury. India had to be content with a draw.

Pant finished the job in the fourth Test in Brisbane by remaining unbeaten on 89 as India chased down a record 328 to become the first side to beat Australia in Brisbane in 32 years. 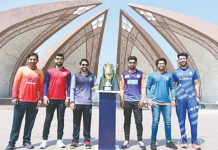