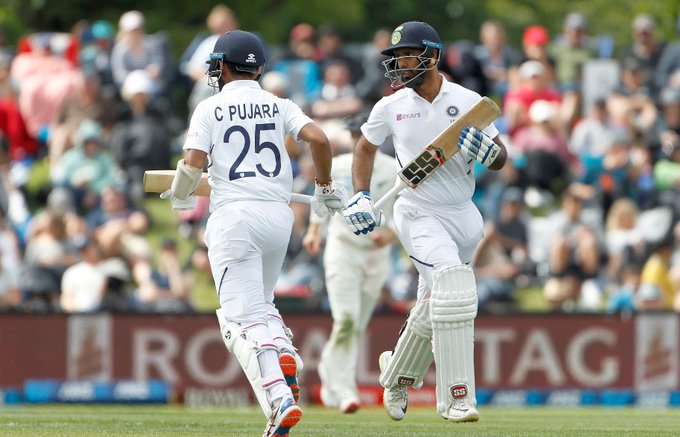 Cheteshwar Pujara names Rohit Sharma and Shubman Gill as the key players who allowed him to play the game in his way.

Despite not being among the highest scorers, Pujara spent a considerable time on the crease as he negated the bowling of Pat Cummins and Co. Pujara’s knock of 56 in the last Test in Brisbane was extremely important for India in their run-chase. He held up one end as other batsmen tried to go for the target at the Gabba.

Pujara in a recent interview with HT said that having attacking players like Rohit Sharma and Shubman Gill allows him to play his natural game.

“Both of them are attacking players. That does help me in some way. If another partner is trying to take the bowler on, it allows me to play my natural game. I have batted with Viru pajji (Sehwag) also, where he would have already put the opposition under pressure with his batting. That’s a great way to build a partnership,” said Pujara.

Pujara was hit 11 times on the body, including dangerous blows on the helmet on the final day as the Australian pace battery tried its best to remove the biggest thorn in their flash. But Pujara bore it all without giving an inch to the opposition. He dug his heels deep in the crease and played 211 deliveries to blunt the Aussie attack.

“The first one hit me just below my shoulder. There was one on the ribs. And one more from [Josh] Hazlewood below the shoulder again. That’s when it started hurting a bit more because it was the same place.”

But the one which made the composed giant fall on his knees came after the 125th ball he faced.

Ouch! Pujara rips his glove off after copping one flush on the glove!

“The most painful one was the ball that hit my finger, because I had already got hit on that finger during practice in Melbourne and had played the Sydney Test with that little bit of pain. I was a little concerned before the game started in Sydney, but things went really well. But the moment I got hit there again in Brisbane, I was in a lot of pain. I thought I had broken my finger.”

Even then, the 33-year-old held his ground, scored a remarkable 56 off 211 agonising deliveries, and made sure that Finisher Rishabh Pant was well set to drive the team to victory before he was finally trapped by ‘Man of the Series’ Pat Cummins on an LBW appeal in the 81st over.

“If I’m a boxer, I want to see how much another player can punch me. Once he is done, that’s when I want to start punching back. That is my game plan. You can punch me as long as you can. Then I’ll show my punches. That is how I planned it,” said the Test veteran.