TNPL 2022 Points Table: The fifth edition of Tamil Nadu Premier League will kickstart from June 23. As per TNPL 2022 schedule, the first match of the season will be played between Chepauk Super Gillies and Nellai Royal Kings in Tirunelveli.

Chepauk Super Gillies has won the most number of trophies in TNPL since 2016. Following are the details of the Tamil Nadu Premier League winners list since 2016: 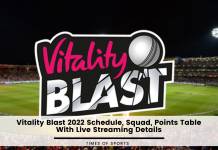