Virat Kohli and Anushka Sharma are not only superstars in their own might but also are two of the world’s most photographed celebrities and also couples.

Kohli and Anushka tied the knot in a private ceremony in 2017 in Tuscany. The wedding was so covert that even their guests were not informed about the location until the last minute. The confidentiality of the wedding was approved of and supported by both Kohli and Sharma’s family.

Kohli claimed that marrying in India with a huge number of guests was too much for them to handle. This is why their wedding in Tuscany was with 42 guests only.

The couple later held a reception for their wedding in Mumbai towards the end of December. The reception was attended by a number of familiar faces that included the Bachchan family, Shah Rukh Khan, Priyanka Chopra, and many others.

Anushka Sharma and Viral Kohli announced today that they are expecting their first child together. The couple took to Instagram to announce the pregnancy with an adorable picture in which Anushka can be seen flaunting her baby bump.

Virat Kohli announces it officially via his Instagram page where he quoted as “And then, we were three! Arriving Jan 2021,”.

Where is Anushka Sharma Now?

After their announcement, it is mandatory for Virat Kohli to leave to UAE where he led Royal Challengers Bangalore in IPL 2020. This UAE trip won’t be the same as of previous tours.

UAE has announced a very strict protocol to be followed in UAE trip amid coronavirus spread. According to which the franchises were allowed to carry a limited number of peoples along with them.

But Virat Kohli and Anushka Sharma flew to UAE as he needs her to stay with her during the whole tournament.

Virat is taking great care of Anushka and is fulfilling her duty. Virat and Anushka will stay in Dubai for two whole months. He is very desperate the get into the field and Virat is more hungry than ever to Perform. He also says that his first love is Cricket.

It’s known that after the IPL tour is completed, she flew back home to India and Kohli had traveled to Syndey for Australia Tour. He’ll be back to India after completing the 1st Test Match which is between December 17 to December 21st to be with Anushka Sharma as they’re expecting their 1st child in January 2021.

Anushka Sharma and Virat Kohli blessed with a baby girl

“We are thrilled to share with you that we have been blessed with a baby girl this afternoon. We thank you all for your love, prayers, and good wishes. Anushka and the baby are both healthy and we are feeling beyond blessed to start this new chapter of our lives. We hope you can respect our privacy at this time,” Virat wrote in a social media post.

“Anushka and the baby are both healthy and we are feeling beyond blessed to start this new chapter of our lives,” wrote Virat.

After blessed with a baby girl the lovely couple gains blessing from almost everyone who loves them. After Virat Kohl left to Chennai to get part in the England Test series Anushka Sharma posted a pic of the Virushka family in Twitter handling.

Anushka Sharma mentioned that they named their baby girl as “Vamika “. According to Indian culture, the name represents Goddess Durga.

Sleep is elusive 😛 but our hearts are SO full ❤️
Thanking you all for your wishes , prayers and good energy 🤗

Anushka Sharma and newborn daughter Vamika join with Virat Kohli to cheer him up in the final test match against England. Virat Kohli led the Indian side to face England to play the 4th Test match at the Narendra Modi Stadium which begins from March 4th.

Anushka Sharma on Tuesday posted a photo of the sunrise from her hotel room that is located along the banks of the Sabarmati river and wished her fans ‘Good Morning.’

This is her first outing after giving birth to her daughter on January 11. According to the reports, the 32-year-old actor traveled to Ahmedabad last week. 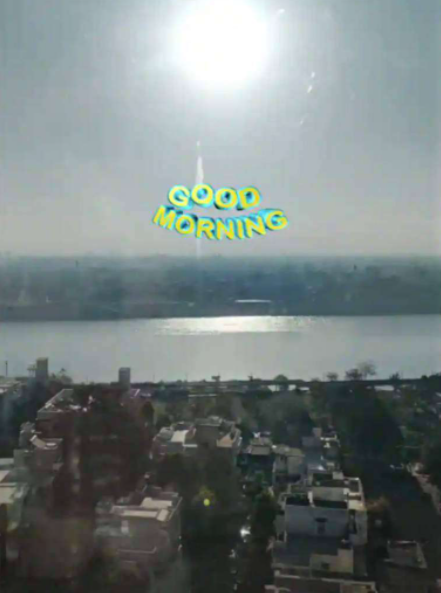 Anushka Sharma accompanied Indian skipper Virat Kohli in prior to the India vs England ODI series. The team arrived in Pune from Ahmedabad ahead of their matches. It was earlier reported that the couple’s daughter Vamika is also with them and fans finally caught a glimpse of the little one with mommy Anushka as she carried her at the airport. Virat was also close by.

However, it did not go amiss that Anushka made every effort to hide her baby from media’s eye. Paparazzi photographers were waiting outside to catch a glimpse of the family but Anushka hid her baby’s face with a soft cloth. She wore a mustard yellow shirt and jeans at the airport and held Vamika close to her chest.

Indian skipper who travels to England to led the Indian cricket team in England for the WTC finals got the company from family. Virat accompanied with wife Anushka Sharma and daughter Vamika to England on June 2, 2021.

“Yes, Both Virat Kohli and Anushka Sharma are in the UK. The two are together in Southampton. And in such a situation, Virat could not leave Anushka Alone. I congratulate Virat and Anushka a lot.” a report revealed.

Anushka Sharma shared a set of adorable pictures of Vamika clicked during her six-month birthday celebration. Indian skipper Virat Kohli’s wife shared the picture without revealing Vamika’s face where the kid has seen enjoying the time in her father’s hand in a park in England.

Anushka captioned the photos as “Her one smile can change our whole world around! I hope we can both live up to the love with which you look at us, little one Happy 6 months to us three,”.

Along with Virat Kohli, his wife Anushka Sharma and daughter Vamika moves to UAE where Virat Kohli is all set to lead RCB in IPL 2021 second phase.

RCB arranged a chattered flight for Virat Kohli and Siraj who were in England where team India played against England in a 5 match test series.

The fifth Test match between India and England, scheduled to begin on September 10 in Manchester, has been cancelled after three support staff of India has tested positive for COVID19.

The news you’ve all been waiting for: King Kohli and Miyan Magic have joined the team in Dubai. 🤩

Anushka Sharma along with Virat Kohli and Vamika returned to Mumbai after the team India got eliminated from ICC T20 World Cup 2021.

Virat Kohli has been given rest by BCCI for the New Zealand T20I series and is expected to join the team for the 2nd Test match against New Zealand at Mumbai.

After Demotion as India’s white-ball skipper, Virat Kohli leads team India in the Test series against South Africa. Anushka Sharma along with Virat Kohli and their daughter travels to South Africa.

Post the unsuccessful T20 World Cup 2021 campaign Virat Kohli has stepped down from the T20I captaincy role. Notably, Virat announces that he will not lead RCB in IPL 2022 when the UAE leg of IPL 2021 kickstarted.

In this situation, BCCI announced Rohit Sharma as the ODI skipper for the upcoming South Africa tour.

Though BCCI President Sourav Ganguly explains the exact reason for Rohit Sharma’s appointment as ODI skipper, many fans believe that BCCI should considered Virat’s captaincy records before taking the decision of changing the ODI captaincy role.

The trio has been snapped at O R Tambo International Airport, Johannesburg, where as usual Anushka Sharma puts all her efforts to protect Vamika from the paparazzi and settled inside the desired travel vehicle.

In July 2022, Virat Kohli along with his wife Anushka Sharma and daughter Vamika headed to Pais for a vacation. However, the family was not happy with their vacation as the country is battling an intense heatwave and the temperatures have soared to 41 degrees which is not ideal for a vacation.

Anushka Sharma shared the image of their hotel room and gave an update on the scorching weather in Paris.