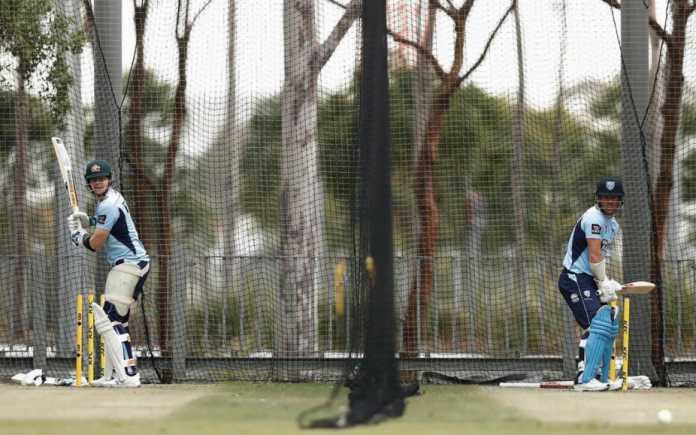 Australian cricketer David Warner is one of the most active athletes on social media. He has often created a buzz by uploading dancing videos of his family. Recently, he has shared a picture to inform his followers that he has started training in nets.

Posting the photo on Instagram, he wrote, “Great to be back at it today outdoors on turf. Pumped for cricket to start back up again for us. Name the player on the left?”

Great to be back at it today outdoors on turf. Pumped for cricket to start back up again for us. Name the player on the left😂😂 ?? 📸 Cred: @ryanpierse

Former Australian captain Steve Smith can also be seen with Warner practicing in the nets. Fans of Smith and Warner will get to see them in action in upcoming Australia vs England series. The two teams will be facing each other in three-match T20 and three-game ODI series expected to commence from September 4.

However, according to InsideSport, players of both the teams, including Warner and Smith, who play in the Indian Premier League will miss the first week of the tournament as Australia vs England series will conclude on September 16.

IPL franchises had requested the Board of Control for Cricket in India (BCCI) to relax quarantine protocols related to Covid-19 for players traveling after participating in the England vs Australia series. But, the BCCI decided against relaxing the norms.

The IPL 2020 is scheduled to be played from September 19 to November 10 in the UAE. Warner plays from Sunrisers Hyderabad in the IPL, while Smith represents Rajasthan Royals in the tournament.

Both the players have played some powerful knocks in the IPL over the years.