When will Raina Retire from IPL?: Suresh Raina has made a startling statement, saying he will not play IPL from next year if his Chennai Super Kings captain MS Dhoni decides to retire from the tournament.

When will Raina Retire from IPL?

They have not only shared the dressing-room as part of the Indian national team but continue to do so at the Chennai Super Kings. Last year Raina once again gave a testament to the bond the two share. Raina announced his international retirement minutes after Dhoni announced his retirement via an Instagram post

“I have four-five years left in me. We have the IPL this year, and then two more teams next year. But I think I’ll play only for CSK till I play. I hope we do well this year. If Dhoni bhaai doesn’t play next season, I too won’t play. We’ve been playing since 2008 (for CSK)… if we win this year then I’ll convince him to play next year too,” Raina said.

“I’ll try my best. If he will not play, then I don’t think I will play for any IPL team.”

After finishing last in 2020, CSK has bounced back this year and is placed second in the now-suspended IPL. They look good to make the playoffs this year as and when the season resumes.

Raina and Dhoni have been part of CSK’s core group of players since the inception of IPL in 2008, apart from the two years the franchise was suspended (2016 and 2017).

Dhoni has also not been in good form over the past two seasons, despite that the CSK CEO Kasi Viswanathan has assured the CSK skipper will continue to represent the franchise.
“He can continue for another one or two years with CSK. He is fully fit, and trains a lot. Don`t see any reason why he should stop. As far as we are concerned, we are happy for what he is doing for CSK. It is not just about his captaincy or the fact that he is a guide or a leader as the most experienced player. We feel he is still good and brings value as a player to the side. He has been a finisher and is doing that for us,” stated Viswanathan.
Having finished seventh last year, CSK were second in the IPL points table this season when the tournament was suspended due to covid-19 in May. The remainder of the tournament will be played in UAE this September. 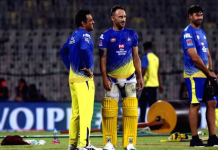