The inaugural edition of the T20 league in South Africa will comprise six franchises and will be played in January-February next year.

Speaking on the development, Parth Jindal, Owner of Pretoria Capitals said, “Anrich Nortje has been an integral part of the growth and success of Delhi Capitals. So when we decided to expand our cricketing footprint to his country, he was always going to be an automatic choice for us.

I believe Anrich will bring to Pretoria Capitals the same kind of fiery performances and off-field calmness we’ve seen him display at DC. I’d also like to welcome Migael Pretorius, who boasts of an impressive domestic track record, to our Capitals family.”

“It is indeed a proud moment for us, as Delhi Capitals is now beyond Delhi. South Africa is no doubt one of the world’s biggest sports loving nations and we can’t wait to enthral the fans there with our passionate brand of cricket,” he added.

Pretoria Capitals is owned by Delhi Capitals had appointed Graham Ford as their head coach, Dale Benkenstein and the most experienced south african all rounder Jacques Kallis as their Assistant coach. 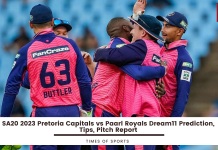