Former Pakistan captain and legendary fast bowler Waqar Younis heaped rich praise on Sachin Tendulkar, saying people of all ages like him for the way he handled his career.

Waqar Younis said Sachin Tendulkar is not just a great player but also a great human being while shedding light on what set him apart during his playing days.

“Sachin Tendulkar is not only a great player, but a great human being also. I mean, keeping aside his Test records and one-day records, as a human being and because of his qualities, people of all ages like him,” Waqar Younis during a chat show for Q20, GloFans.

“He is a very humble man and everyone has seen his achievements and has seen him performing on the field. Overall, full marks to him for the way he has handled his career,” he added.

Waqar Younis and Sachin Tendulkar have had some of the memorable duels in India-Pakistan clashes of the past.

Notably, both Waqar and Tendulkar made their international debut in 1989 in the Karachi Test and the Pakistan fast bowler went on to get the wicket of the then Indian teenager. 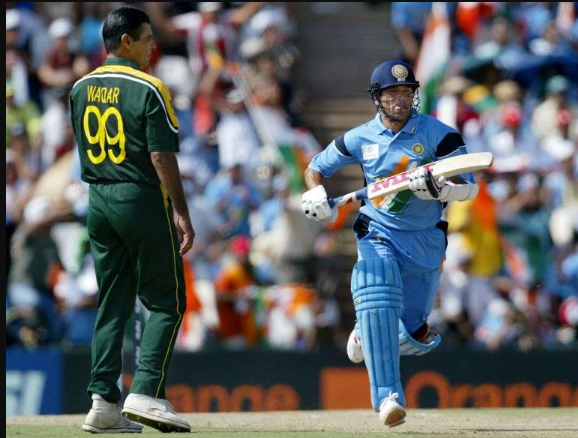 Recalling the 2003 World Cup knock from Sachin Tendulkar that helped India beat Pakistan in Centurion, Waqar Younis said it was one of the best innings he has ever seen.

“Sachin Tendulkar’s innings against Pakistan in 2003 is hard to be described in words because he played so well and especially because India was under pressure on that day and we were good at bowling,” Waqar said.

“Probably even if you would ask Sachin about this, he might also say the same thing, that it was probably one of his best innings. The way he faced Shoaib Akhtar, Wasim Akram and me under pressure and the way he attacked and got early runs, I think it was amazing innings, one of the best innings I’ve seen.”

WATCH : “Umpire And I Got Death Threats For Ages” – Tim Bresnan On Dismissing Sachin Tendulkar At Oval