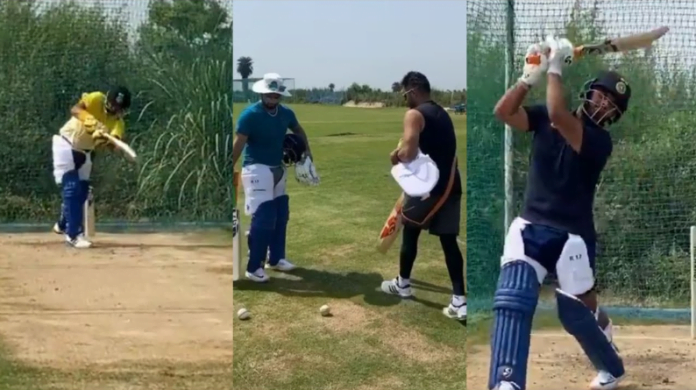 While the Board of Control for Cricket in India (BCCI) is yet to begin training camp for the Men in Blue, batsman Suresh Raina was recently seen enjoying a practice session with fellow teammate Piyush Chawla and Mohammad Shami.

Raina took to his official Twitter handle and posted a video of him hitting the nets with spinner Chawla and fast bowler Shami during the weekend.

“When you nailed your practice this week and ready to enjoy the weekend practice with none other than @MdShami11 & piyush Chawla. Keeping the momentum going!Good start to the weekend! Enjoy the little victories, Happy weekend!,”Raina wrote along with the video.

When you nailed your practice this week and ready to enjoy the weekend practice with none other than @MdShami11 & piyush Chawla 🏏 Keeping the momentum going!
Good start to the weekend! 💪🤍 Enjoy the little victories, Happy weekend !😎✌️ pic.twitter.com/H2mtSmhP4t

On a work front, Raina last represented the national side during an ODI series against England in July 2018.

Raina was scheduled to play for the Chennai Super Kings (CSK) in the Indian Premier League (IPL 2020)–which was slated to take place from March 29 to May 24 but was postponed indefinitely by the BCCI due to coronavirus pandemic.

After Yuvraj Singh, Indian batsman Suresh Raina has now criticized the national team selection process. In an interview with Aaj Tak, Raina said that the national selectors should have been more responsible in their treatment of the senior players.

“I think selectors should have taken more responsibility towards the senior players. No matter how big a player you are at the end of the day you always play for the team, you perform, you go home and if you don’t get to play the next morning, then you have to know the reason why I am not getting the batting on the net,” Raina was quoted as saying by Aaj Tak’s Senior Editor Vikrant Gupta.

“Tell me if I have any deficiency then I will work hard. Someone will have to tell me where to work hard. If he does not know, then there will be a doubt in his mind somewhere. When the cause is not known, how will he improve?” he added.

Suresh Raina underwent knee surgery in August 2019 and is getting better day-by-day. He hasn’t played for team India since July 2018. However, the CSK batsman is yet to give up on his ambitions to play in blue colours.

“When you play Ranji Trophy no one comes there to watch the match. Then you wait for IPL because you get the chance to face world-class bowlers. And if you are getting paid by the IPL franchise, then you have to perform in every game. Pressure is very high in IPL. A T20 game is not easy but tough. There is not even time to think. If you get hurt during IPL, you don’t get recovery time.”

Raina also added that he has learned a lot from this experience and that if he ever becomes a selector in the future, he would make it a point to inform the player the reason for him being dropped.