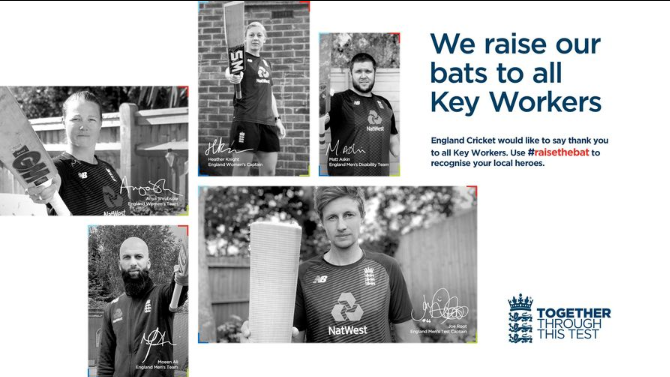 England’s players will wear the names of chose COVID labourers with cricketing foundations on their preparation shirts during the up and coming Test series against West Indies in acknowledgement of their sacrificial administrations.

The England and Wales Cricket Board (ECB) has reported that the three-match rubber, to be played behind the closed doors at The Ageas Bowl and Old Trafford because of the pandemic, will be named “raise the bat” arrangement as a tribute to those on the forefront.

This will be the first serious cricket apparatus since the pandemic carried the wearing scene to a stop in March. In the development to the principal Test, which starts on July 8 at the Ageas Bowl, England’s cricketers will wear the names of the chose key labourers on their shirts.

The individuals named on the shirts incorporate Dr Vikas Kumar, a Specialist in Anesthetics and Critical Care at Darlington Memorial Hospital, who plays for Cowgate Cricket Club in Newcastle in his extra time.

Emily Blakemore, a full-time medical attendant and volunteer at Astwood Bank Cricket Club, is likewise among the divinely selected individuals.

The rundown incorporates instructors, specialists, attendants, carers and social labourers and their names have been selected by their nearby cricket clubs.

“We’ve waited a long time for this moment, and we wouldn’t be here without the West Indies – we are so grateful to them for making the tour happen,” England captain Joe Root was quoted as saying by the ECB.

“As we get back to playing the game we love, we want to take the time to honour the brave key workers who went in to bat for their country under the toughest circumstances.

“It’s only fitting that we use this series as an opportunity to ‘raise a bat’ in their honour. We’ll wear their names with pride,” the prolific scorer added.

Remarking on the Test Series, ECB CEO Tom Harrison stated: “As we stage the primary worldwide wearing rivalry in the UK since COVID-19 started, we need to pay tribute to the individuals who have courageously had their influence during this emergency.

Know a key worker in the cricket community? 🏏

Nominate them using #RaiseTheBat and give them the recognition they deserve 👏 pic.twitter.com/njlmhFGj0X

“Through the “raise the bat” Test Series, we will demonstrate our appreciation to key specialists.”

The transition to committing the arrangement to key COVID-29 specialists comes after the ECB’s Test sponsorship bargain, a two-year concurrence with Specsavers, passed toward the finish of the Ashes the previous summer with no substitution arranged.

Harrison added, “It has been a long and challenging journey to cricket’s return and while this pales in comparison to what the country has faced, we hope the raisethebat Test Series will bring some enjoyment and light relief to people’s lives.”

As part of the ECB’s nationwide ‘Together Through This Test’ campaign, which launched last month with a short film narrated by Stephen Fry, the #raisethebat initiative has already featured key workers on over 300 billboards across England and Wales, with more billboards to come from 29 June.

Blakemore told the ECB: “It’s going to be an absolute honour to see one of the England men’s players come out while wearing my name on the back of their shirt.

“It has been such a difficult time for so many people, and there’s still a lot of hard work ahead, but it’s exciting that we’ll be able to see some cricket again.

“The cricket family has pulled together at a tough time and I can’t wait until we can get playing at my club again. Until then, hopefully Joe Root and the team can give us something to cheer about.”