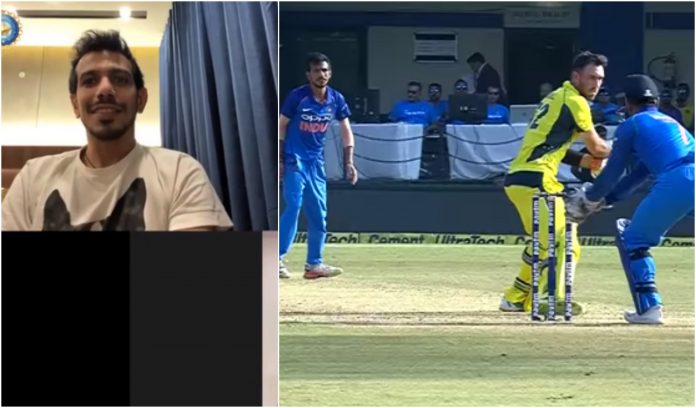 India leg-spinner Yuzvendra Chahal has emerged as one of the more reliable bowlers in limited-overs cricket. His captains usually deploy him whenever there is a need to break set partnership between batsmen.

Chahal recently took part in a conversation with his teammates Kuldeep Yadav and Mayank Agarwal in a show on BCCI.tv where he revealed how he and former India captain MS Dhoni set up Australian batsman Glenn Maxwell in the third ODI at Holkar Stadium in Indore in 2017.

Australia at that time was touring India for a five-match One-day International and three-match Twenty20 series.

The leg-spinner said that Maxwell was lacking patience in the series and had decided to go after him as soon as he came into the attack.

He said during the match he had a discussion with Dhoni on how to tackle the Australian player. According to Chahal, the former India captain asked him to mix up deliveries and not to show Maxwell any wide delivery so that when he bowled outside off stump, it would become a wicket-taking delivery.

Chahal added, “Me and Mahi bhai had planned to bowl him wide off stump. I thought he will come down the track and that is why I threw the ball much wider and got the wicket.”

The leg-spinner took Maxwell’s wicket thrice in the ODIs and once in T20 series. India got the better of Australia in the ODI series, winning it 4-1. However, the T20 series ended in a draw with both teams winning one game each.

Yuzi caught netizens’ attention on social media after he took to Twitter yesterday to try the gender swap trend. However, he did not try it on himself but rather his colleague Rohit Sharma.