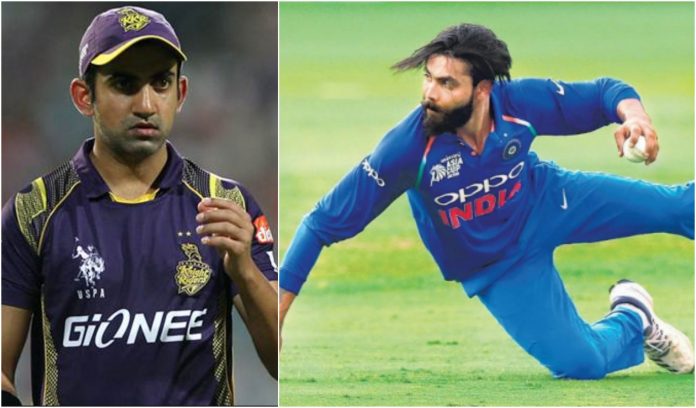 Former India opener and now a successful politician Gautam Gambhir picked Ravindra Jadeja as the best fielder in world cricket at the moment and also explained why the Indian all-rounder is incomparable, at least when it comes to throwing or covering the field.

Jadeja has often earn praise and accolades from former cricketers, several experts and fans around the world for his catching brilliance on the field.

Speaking on Star Sports show – Cricket Connected, the 38-year-old Gambhir explained why Jadeja is the best fielder in world cricket. “I think, in world cricket, there is no better fielder than Jadeja, an overall fielder. Maybe he doesn’t field at slip and gully, but no one is better than him in throwing.”

“No one covers the outfield like him. Put him at point or cover, you can get him to field anywhere. No one has a safer pair of hands than him. Ravindra Jadeja, probably is the best fielder in world cricket,” he added.

The Indian team has over the years been known as a unit which has been brilliant with bat and ball, but lacked a bit when it comes to the fielding department. While things started changing under Sourav Ganguly when he had Mohammad Kaif and Yuvraj Singh manning the off-side.

Since then things have only improved further now and former opener Gambhir believes that Jadeja has taken it to another level.

What a catch @imjadeja – you beauty! Body that defies coordinaton and elasticity #NZvsIND #Jadeja pic.twitter.com/POWV7CYI2G

South African fielding great Jonty Rhodes earlier rated Jadeja among the best fielders in the world, saying the Indian all-rounder has great commitment and anticipation skill. “Jaddu has taken some fantastic catches. The key is he is very committed. He is very good at anticipating the ball also,” Rhodes told veteran India batsman Suresh Raina during an Instagram Live chat.

Asked to name the best fielders in the world at the moment, the 50-year old, who changed the definition of fielding, said: “I love to watch AB (de Villiers) batting or fielding. (Martin) Guptill is there. Jaddu. Also Michael Bevan, he had excellent speed. Also Jaddu has great speed on the field.”

Rhodes had also lavished praise on 2011 ODI World Cup winner Raina, who himself is a brilliant fielder. “You remind me of me. I know how hard fields are in India and I have always have been a big fan (of you),” he said.