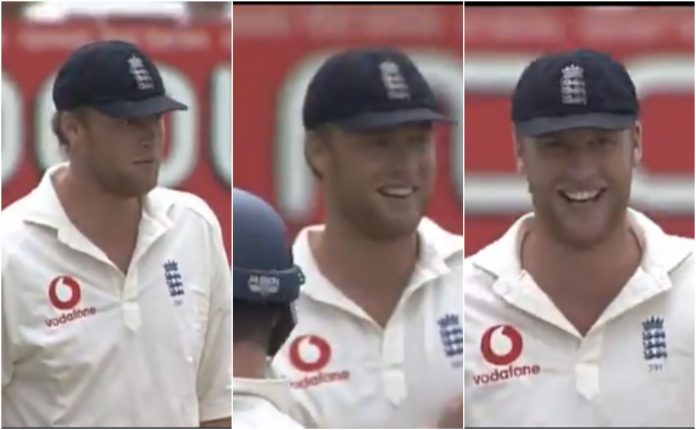 Former England all-rounder Andrew Flintoff has recalled his sledge to Windies pacer Tino Best in 2004, saying that was the best thing he ever did on the cricket field.

The official handle of England Cricket had shared a video from 2004, in which Flintoff can be seen prompting Best to hit a six on the bowling off Ashley Giles.

Possibly the best thing I did on a cricket field , thanks for popping in Tino 🤦🏼‍♂️ https://t.co/93ENIKZZqK

In the video, Flintoff can be heard saying, ‘Mind the Windows’. The all-rounder was standing at the first-slip position and was sledging Best to get under his skin.

Seeing the video, Flintoff tweeted: “Possibly the best thing I did on a cricket field, thanks for popping in Tino”.

In the match between England and West Indies in 2004, Best was trying to hit Giles for a maximum but he was unable to connect the ball properly. It was then, Flintoff said ‘Mind The Windows’ with a big smile on his face.

The move then riled up Best, and on the next ball, he decided to step out of the crease to hit a six, but he ended up missing the ball and was stumped.

After that Flintoff had a big grin on his face and he celebrated in style.

The commentator was Richie Benaud at that time, and he also took a jibe at Best, saying: “whether Giles outbowled Best or outtalked him, I do not know.”

England have named 30 players in their “behind-closed-doors training group” who will live and train at the Ageas Bowl in the run-up to the first Test against West Indies, set to begin at the venue on 8 July.

The group will play a three-day practice match among themselves starting on 1 July, after which the squad for the first Test will be selected. National Selector Ed Smith was upbeat about the return of cricket.