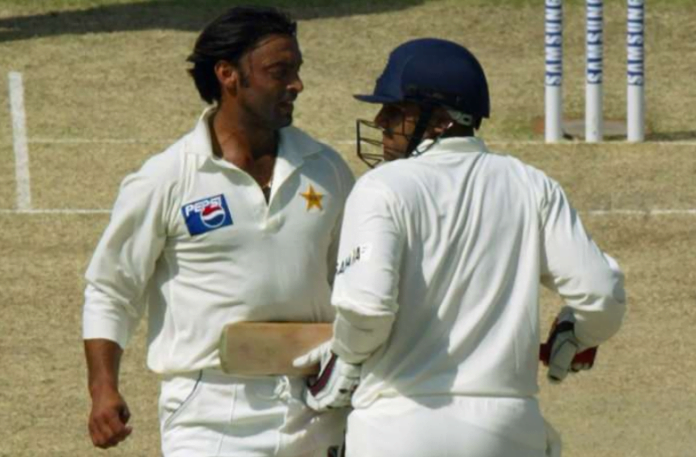 Virender Sehwag’s case of having sledged Shoaib Akhtar by letting him know Sachin Tendulkar was his dad was totally made up, said the Pakistan pacer.

Sehwag Conversation with Shoaib Akhtar During the Match:

Sehwag had said at an award show a few years ago that he had reacted to a barrage of sledging from Akhtar by telling him to say those things to Tendulkar, who was at the other end. When Tendulkar hit Akhtar for a six, Sehwag said he had told Akhtar: “Baap baap hota hai aur beta beta.” Akhtar said in a tweet on Sunday that Sehwag would have had no place to run if he had said something like that to him.

Sehwag Reveals in An Award Show:

At an award show a few years ago where both Indian and Pakistani players were present, Shah Rukh Khan asking Sehwag to relate some incidents of sledging. Sehwag had said he had once been batting close to 200 when Akhtar started sledging him.

In a recent interview, Akhtar said he would not have spared Sehwag and would have beaten him if he had used words like that against him on the field.

“Would he survive after saying something like that to me? Would I leave him? I would beat him up at the ground and then at the hotel. The story has been made up,” Akhtar said.