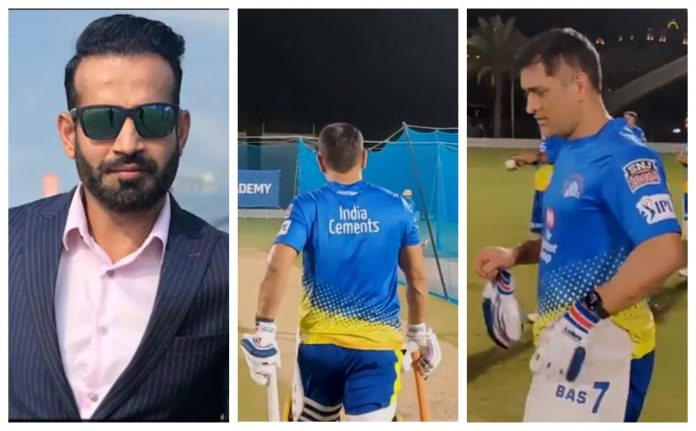 Former India all-rounder Irfan Pathan has expressed his feeling on seeing the new training regime of MS Dhoni in the UAE ahead of the IPL 2020.

From Friday evening, Dhoni’s Chennai Super Kings came out to practice. Since then, CSK players have been sweating it out in the nets with a recent video showcasing Dhoni, Shane Watson, and the rest of the squad working hard.

CSK recently posted a video on their social media handles where Mahi, along with Ravindra Jadeja, Piyush Chawla, Ambati Rayudu, etc can be seen putting a shift in ahead of the IPL 2020 kickoff.

Those who are aware of Dhoni’s training pattern know that the former India captain never practices wicketkeeping in the nets, but has made an exception this time around. Soon Irfan Pathan made quick notes on his training session.

“We have seen a new visual where we have seen MS Dhoni keeping the wickets. This never happens, this is something new for me because I have played cricket for so many years with him, whether it is for the Indian team or in the league with CSK, I have never seen him keeping wickets,” Pathan told Star Sports.

“So this is because he has not played cricket for a long time. I guess there was some leg-spinner bowling, so he may be trying to check the new bowlers but it is good to see that he is doing keeping during practice.”

Dhoni last played any form of cricket in July of last year – the semifinal of the World Cup against New Zealand which ended in heartbreak for Virat Kohli’s India. Dhoni announced his retirement from international cricket on August 15 but Dhoni is keen to get back playing for a CSK, a side he has molded into one of the best IPL teams of all time.

CSK will be taking on Mumbai Indians in the opener on September 19(according to IPL 2020 schedule) and the responsibilities he’ll share is, even more, this time around in the absence of Suresh Raina and Harbhajan Singh.

“Absolutely, this had to happen. And these are good visuals because there has been some disruption in Chennai Super Kings after the withdrawal of two players with Suresh Raina coming back and Harbhajan Singh not playing,” Pathan said.