First match at Dharamsala on March 12 while the second ODI will be held at the Bharat Ratna Shri Atal Bihari Vajpayee Ekana Cricket Stadium in Lucknow on March 15. The third and final ODI will be played at the famed Eden Gardens in Kolkata on March 18.

Virat Kohli recently lost his No.1 position in Test ranking due to his poor performance in the last 2 Test matches. Thus fans expect him to get back to his form at least in ODI matches that played in home. Still India didn’t announced their squad planned for the ODI format against South Africa.

Faf du Plessis and Rassie van der Dussen made a return to the South Africa One-day International (ODI) squad after being named in the 15-member team for the series in India.

“Left-arm spinner, George Linde has received his maiden call-up into the Proteas’ ODI team ahead of their short outbound tour to India from 12-17 March 2020. It will consist of a 3-match ODI series taking place in Dharamsala, Lucknow and Kolkata,” Cricket South Africa confirmed with a tweet.

Klaasen hit 123 not out in a South African total of 291 for seven. Australia were on target midway through their reply but lost their last seven wickets for 43 runs to be bowled out for 217. Wrist spinner Tabraiz Shamsi was withdrawn his name for India ODIs as he and his wife Khadija are anticipating the birth of their first child.

IND vs SA 2022: Why Sanju Samson Not Played in Top-Order? 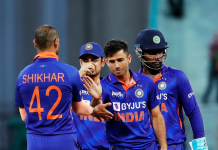