England opener Jonny Bairstow slams Sunil Gavaskar for his comment over him. Jonny Bairstow who was an integral part of the England national team failed to prove his worth in the Test series where the visitors lose the series by 3-1.

The right-handed batsman had got three ducks in four Test innings of the series against Virat Kohli led  India that England lost 1-3 earlier this month and Gavaskar had said the batsman looked “uninterested” during his stay at the crease.

However, after bouncing back into form, scoring 94 and 124 in the first two ODIs while providing England with rocking starts, Bairstow responded to Gavaskar’s comments.

“I am interested [in knowing] as to how that opinion could have been made, especially as there’s been no correspondence or communication between myself and him,” said Bairstow.

“He’s more than welcome to give me a ring and I’ll speak to him about my will to do well in Test cricket, and the enjoyment I do get out of playing Test cricket.

“My phone is on and if he does want to give me a call or a message, he should feel free.”

He said he would love to surpass Root and become England’s top century-maker.

“Naturally, you would like to have the most ODI hundreds for England,” he said.

“I’m happy with how I’m playing and I’m happy with those figures, but they mean nothing if you don’t keep converting in the future.”

Talking about the 2nd ODI, Bairstow and Ben Stokes played knocks of 124 and 99 respectively as England chased down the 337-run target with utmost ease to level the three-match series 1-1 at the Maharashtra Cricket Association Stadium in Pune.

The series decider will be played at the same venue on Sunday. 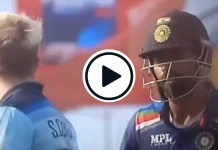