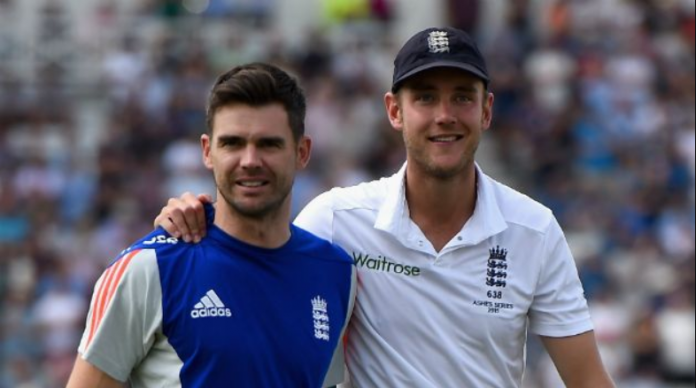 Jimmy Anderson admits he wonders whether England will ever again employ his strike partnership with Stuart Broad that has brought more than 1,100 Test wickets.

Anderson hopes to be reunited with Broad with the pink ball under lights in Ahmedabad in the third Test but fears their days together may be numbered.

‘It’s another tricky one to predict,’ said Anderson of the make-up of England’s pace attack on Wednesday.

‘We have so many good fast bowlers in our group now. Olly Stoke was brilliant in the second Test, Mark Wood is back out here and if Jofra Archer is fit too we have a lot to choose from.

‘I love bowling with Stuart but It has definitely crossed our minds (that they have played their last Test together). I just hope there will be times in a crucial match when they will need our experience. All we can do is try to stay in the best shape possible and if we do get the nod together next summer or in the back end of the year do our best for the team.’

Anderson, 38, says the pink SG ball that will be used on Wednesday has been ‘swinging a bit’ in the nets but he expects none of the reverse swing that saw him make such a spectacular impact in the first Test before he was rested for the second.

‘The pitch has got grass on it but I am pretty sure it won’t be there when we turn up on match day,’ said Anderson. ‘If it turns out to be really abrasive there might be a little bit of reverse but I’m not expecting it from how the ball has performed in nets.’

England’s record wicket-taker was ‘frustrated’ to be left out after doing so well in the first Test win in Chennai but says he can ‘see the bigger picture’ and does not feel he is being overly protected while in the best shape and form of his career.

‘I don’t think I’m being shielded,’ he added. ‘It’s a case of trying to stay fit as long as possible and England not bowling anyone into the dirt until they break. The best way to get your best players firing as long as possible is to give them a little rest every now and then.’

Meanwhile India’s Rohit Sharma has defended the controversial second Test pitch in Chennai and India’s right to use home advantage.

‘Pitches have been prepared like this in India for years,’ said Sharma, whose 161 set up India’s series’-levelling victory. ‘Every side takes advantage of home conditions. When we travel people make it difficult for us.’