MS Dhoni-led Chennai Super Kings is one of the best teams in the IPL. But CSK struggles to show their best in the 13th edition of IPL so far and is on the verge to miss the playoff. After losing 7 matches in IPL 2020 so far CSK has been pushed to the bottom of the IPL points table.

First and foremost, the Mahendra Singh Dhoni-led team needs to win all of their remaining games. This will take their points tally to 14. Out of these four matches, two are against Kolkata Knight Riders and Kings XI Punjab both fighting for that fourth spot.

The next thing they need to ensure is that none of these wins are last-over finishes. While chasing they need to finish games with few balls to go and while defending, this must ensure that margin is decent. It will boost Chennai’s net run rate which currently stands at -0.463.

Historically, we have seen teams qualify for play-offs with 14 points. However, the phenomenon IPL has been, 2019 saw SRH move to the next round with just 12 points pipping KKR on the basis of net run rate. CSK will be looking to do the same.

Dhoni-led CSK so far entered playoff in every season they played so far. CSK is also the three-times champion in the IPL and holds the second position next to MI who bags four trophies so far.

After announcing his retirement Dhoni fans expect a massive game from their “Thala”. But Dhoni struggles to make an impact in the IPL 2020 hosts in UAE. 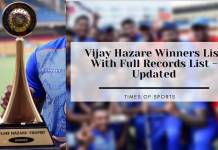