Asia Cup 2022 Schedule: Established in 1983, Asia Cup 2022 will be the 15th edition of the tournament which is scheduled to play during August and September 2022 in the United Arab Emirates.

Originally, Asia Cup 2022 was scheduled to play in Sri Lanka but owing to the economic and political crisis in the country the tournament moved to UAE. ACC announced the Asia Cup 2022 Schedule on August 2, 2022.

With a total of 7 titles(six ODI and one T20I), India remains the most successful team in the tournament while Sri Lanka holds the second position with five titles.

UAE, Kuwait, Singapore, and Hong Kong will play a qualifying round with the winner joining India, Pakistan, Sri Lanka, Afghanistan, and Bangladesh in the main tournament.

A total of 6 teams will participate in the upcoming Asia Cup 2022. While 5 teams have already qualified for the tournament 1 team from Hong Kong, Kuwait, Singapore, and UAE will qualify and join the rest of the teams.

A total of 13 matches(including the final) will be played between 6 teams during the Asia Cup 2022 tournament. The main tournament will feature six teams divided into two groups.

Each team plays within the group once. The top two teams qualify for the Super 4 round where the teams play against each other in league format again before the final where the top two would feature. READ: Asia Cup 2022 Live Streaming for All Locations With Subscription Details 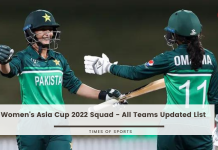