Tilak Varma Biography: Tilak Varma had come across an inspiring journey which will motivate every aspiring cricketer who set a target of reaching a higher position in cricket purely based on their hard work and skills.

Born in a lower-middle-class family, Tilak Varma’s extraordinary skill grabbed the attention of Salam Bayash(his coach) who backed him throughout his journey.

Though many have not seen his gameplay, one can understand his level when top IPL teams get into a bidding war to rope him in the IPL 2022 mega auction. MI had to beat the likes of Sunrisers Hyderabad, Chennai Super Kings, and Rajasthan Royals to bag his services for the IPL 2022 season.

Though he didn’t listed in the top 10 most expensive uncapped players in IPL 2022 mega auction, he still earned 8.5 times more money than his base price.

Check out the inspiring Tilak Varma biography along with his family background, career, stats, and records. 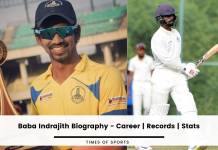