Toss : England have won the toss and have opted to field

Bavuma and de Kock are at the crease, started the innings without any pressure. de Kock lose his wicket when he scored 31 from just 15 balls(4×3,6×2) to Moeen Ali. In prior to the de Kock wicket the openers scored 48 runs in 4.1 overs and provide a good base to the team. Rassie van der Dussen joins hands with the Bavuma and raise the team score with a partnership of 63 runs. South Africa crossed 100 runs within 10 overs, soon Dussen(31 off 26)  lose his wicket to Strokes.

In very next over Bavuma lost his wicket when he is 7 runs away from his half century. After Bavuma’s wicket South Africa starts losing wickets in a constant interval. In the last over, Jordan almost had a chance for a hat-trick after uprooting Pretorius(1)and B Hendricks(0). Where Steyn comes in after almost a year and strike the hat-trick wicket ball to the four line. With a run-out in the last ball while try to pick a singles South Africa ended up in 177 runs. Jordan took 3 wickets in the last over for 5 runs.

Steyn after a year off the ground gets in and open the bowling attack despite of the expectation Buttler smashed couple of 4’s and England scored 11 in the first over. Lungi Ngidi(right arm fast) controls the run flow in second over then Styen back into attack for the 3rd over and picks the Buttler’s wicket. Steyn move to the top of the leading wicket takers for South Africa in T20I’s after Imran Tahir. Roy partners with Bairstow and starts his aggressive strike in JJ Smuts over and scores 22 runs in that over. This duo sums up 72 runs when Bairstow got LBW by Phehlukwayo and returns to dressing room.

Hendricks’s “too short and too slow” ball magic

Roy scored his fifty with a four and leads the England towards the winning but Ngidi released some special spell after Hendricks picks the Aggressive striker Roy’s wicket. Jason Roy scored 70 runs from 38 balls before he leaves a catch to the Ngidi in Hendricks’s “Too slow and Too short ” ball. All-rounder Strokes lose his wicket to the Ngidi without scoring as expected. The England captain Morgon is the only hope for them but it soon got scattered by Hendricks last ball.

At his brutal best! 💥

With 7 needed from 6 balls, Ngidi bowled the last over with pressure but soon changed when he dismissed the Tom Curran in his second ball while try to hit a big shot. With a need of 5 from 5 Ngidi bowled out Ali and builds pressure over the England players. Last balls requires 3 to win where Steyn’s underarm calm throw grabs the winning for South Africa. England surrender to Ngidi’s spell and lost their 1st T20I with a difference of “single” run. Thus the thrilling last over match ends in favour for South Africa

📺 Relive the final over of last nights epic T20.

🇿🇦 With England needing just 7 runs to win in the final over, Lungi Ngidi did this. #SAvENG pic.twitter.com/O3SoDdSaSo

Ngidi’s under pressure last over change the game and claim South Africa to win their 1st T20I and lead the series in 1-0. 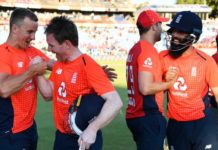 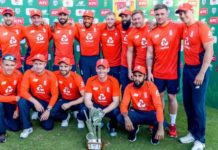 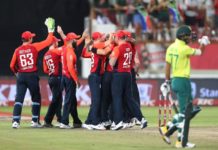