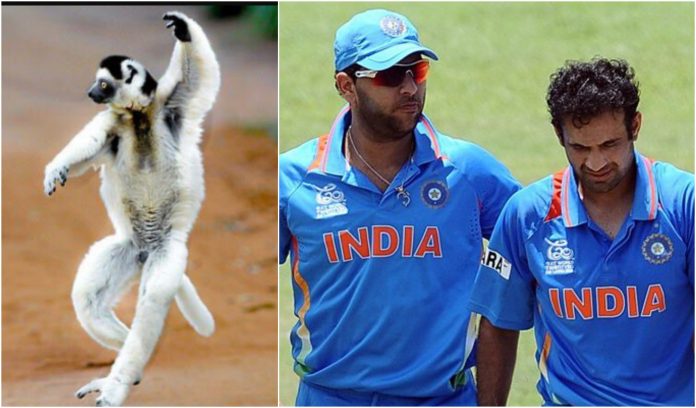 It is an obvious fact that former India cricketers Yuvraj Singh and Irfan Pathan are dear companions and henceforth when the last posted an image via web-based networking media contrasting his bowling activity with a ‘Sifaka’ on Thursday, the former rushed to react.

In Irfan’s most recent tweet, the Sifaka can be seen remaining with open hands, which to some degree takes after his bowling activity. He utilized a giggling emoticon and asked fans “close enough???”. Not simply the fans, Yuvi thought of a diverting reaction where he made jokes about Irfan. Yuvraj composed wear not think about the bowling, however handling.

😂😂😂 I think you chose wrong emoji bro. You meant this?? pic.twitter.com/nWSbCigQft

The banter did not end there as Irfan reacted to Yuvi’s response.

😂😂😂 I think you chose wrong emoji bro. You meant this?? pic.twitter.com/nWSbCigQft

Both the cricketers have been enjoying their time at home during the coronavirus lockdown. Irfan has done a commendable job in helping the needy during the testing times along with his brother, Yusuf.

Yuvraj and Irfan have been part of two World Cup win – the inaugural T20 WC and the 2011 WC.

Irfan Pathan Picks the Best Batsman to Bat at No.3 Position :

Earlier Irfan Pathan has expressed his thoughts on how Virat Kohli has the better technique to bat at number 3 for Team India ahead of former Indian skipper MS Dhoni.

Pathan further claimed that Dhoni himself decided to demote himself from that position, in which he made his mark in international cricket for India after making his ODI debut in 2004.

“But MS had all the chance to bat at No. 3, he didn’t. Look, I really believe that if you compare Virat and Mahendra Singh Dhoni batting at No. 3, I still feel Virat has a better technique,” Pathan said at a TV show.

Also read: “He Obviously Needs to Play. If He Does, He Should for India”: Irfan Pathan on Dhoni