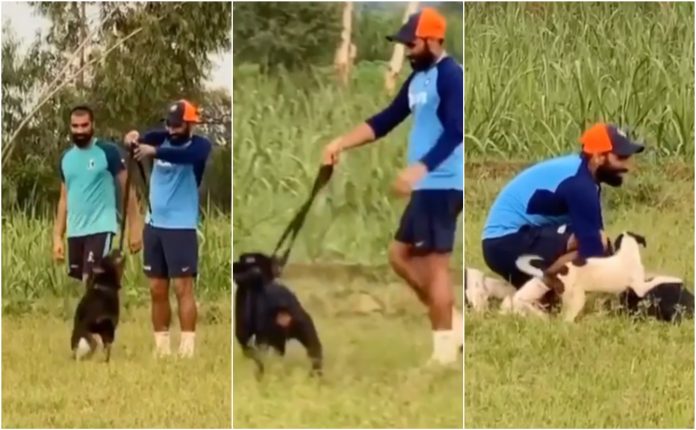 In an offer to improve his speed, India cricketer Mohammed Shami had a run with his pet, Jack. On Friday, the pacer took to Instagram and shared the video where he can be seen running with his dog. It without a doubt seems to be a successful method to prepare under the current COVID-19 conditions.

He captioned the video, “Speed work with the jack.”

With the cash-rich Indian Premier League delayed uncertainly because of the pandemic, this is by all accounts a decent method to remaining fit.

During the 2017-18 tour of South Africa, 12 of his 15 wickets came in the second innings. Asked about this piece of statistics, Shami said,” I’m not sure, it just happens.”

“I use the game very smartly in the second innings. Like in the recent match we played in Vizag (against South Africa) where I got a five-for, the pitch was pretty dead and wasn’t offering any bounce,” Shami told former India wicketkeeper Deep Dasgupta on Cricketbaazi, a talk show on ESPNcricinfo.

Earlier Mohammed Shami shared a video where he was seen practising cricket in indoor with his family. Right-arm fast bowler, who consistently bowls around the 140 to 145 km/h (87 to 90 mph) mark, and swings and seams ball at that pace which makes him a deceptively potent fast bowler.

Shami made his debut in Twenty20 Internationals on 21 March 2014 against Pakistan in the opening match of the World T20 and took the wicket of Umar Akmal. He was played for only three matches in the tournament and dropped from the rest. He was included in the side in 2014 tour of England, following the Test series, in July. He played in the lone match of the series and finished with 3 wickets conceding 38 runs.