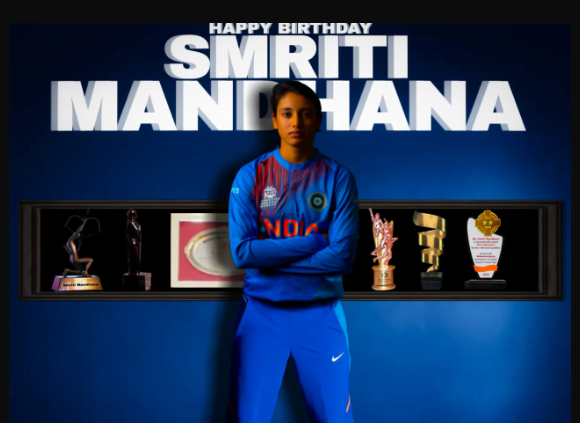 Mandhana’s tryst with cricket began when her father used to take her brother for cricket practice every morning. She used to wake up at 5 a.m. to tag along and after her brother was done with the practice, she used to get just 10-15 balls to face. 10-15 balls gradually became 20-30 and it was not long before she stole the limelight from her brother.

Seeing her brother bat left-handed, she also started doing the same and it took only a few years for her talent to push her into the Indian team. She was selected in the Maharashtra under-15 squad at the age of just 9 and by the time she was 11, she had already made it to the under-19 squad.

Mandhana’s name first popped up in the Indian media when she scored an unbeaten double century – a knock of 224 off just 150 deliveries – against Gujarat in the West zone under-19 ODI tournament. The runs had come off the bat which had been gifted by Rahul Dravid to her and she indeed made good use of it.

At 16, Mandhana made her ODI debut in April 2013 against Bangladesh in Ahmedabad. Just a year later, she played her first Test match and made her maiden Test half-century to see India to a historic Test win over England.

She is considered as one of the best batswomen in the current generation and is even ranked No. 4 in ODI batting rankings and is the only Indian in the top 5 of the list.

She also captained women’s IPL team Trailblazers. The southpaw grabbed the limelight through stellar performances in the ICC Women’s World T20 in 2018.

Her 178-run streak in five matches earned her the tournament’s third-highest run aggregator. Since then there was no stopping her as she continued to pile up runs in international and Franchise cricket.

Wishes From BCCI As Smriti Turns 24:

Having turned 24 today, Mandhana’s numbers in ODI Cricket are close to the gold standard. She has already scored 2,025 ODI runs from 51 matches at an average of 43.08 and a strike rate of 84.41. This includes four centuries and 17 half-centuries. In T20 Internationals as well, she averages over 25 with a strike rate touching 120.

📽️Let’s celebrate our very own @mandhana_smriti‘s birthday revisiting her fine 9⃣0⃣-run knock during the #WWC17. 👏👏

Mandhana has not been able to live up to the expectations in ICC events. She began the 2017 ODI World Cup, in which India finished as runners-up, on a great note, scoring 90 against England and 106 not out against West Indies but she finished the tournament with 235 runs from 9 matches at a pedestrian average of 29.00.

The more you see of Mandhana, you cannot help but feel that her best cricket is yet to come. At 24 years of age and the women’s IPL in the making, Mandhana is all set to have the world at her feet over the coming five years or so.

Mandhana, with the rest of the Women’s national team, made it to the final of the 2020 T20 World Cup in Australia but unfortunately got outclassed by the hosts in the finale of the tournament.

Board of Control for Cricket in India (BCCI) recently also named her as the Best Women’s International Cricketer.