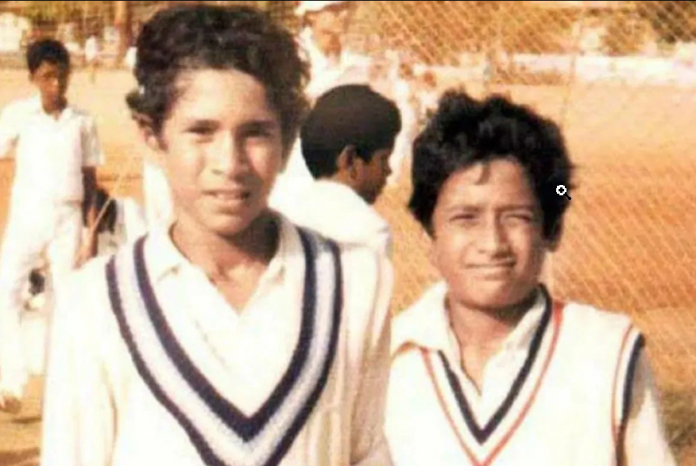 Former India batsman Sachin Tendulkar made his debut against Pakistan in 1989 in Karachi. But not many would know that Sachin once fielded for Pakistan in an exhibition match, and rubbed shoulders with some of the greats.

As a 13-year-old, Sachin took the field for Pakistan in Brabourne Stadium, when Javed Miandad and Abdul Qadir had stepped out of the field.

The 47-year-old recalled the incident in his autobiography, ‘Playing It My Way’. He even wondered if Imran Khan remembered the incident.

“I don’t know whether Imran Khan remembers this or has any idea that I once fielded for his Pakistan team,” writes Tendulkar.

He additionally proceeded to depict how he could have been engaged with Kapil Dev’s dismissal, and how he ran a significant distance to take his catch.

Watch Hemant Kenkre Narrates the Story Of this Incident:

Sachin Tendulkar Against Pakistan in 1999 Test:

Prior, Waqar Younis had discussed Sachin’s batting in the 1999 Chennai Test, where he made a Ton which couldn’t take India to a success.

“We took a new ball and first Nayan Mongia hit one in the air. I think he was in a rush or I don’t know what went through his mind,” Waqar said on The Greatest Rivalry Podcast. “He thought the game was over and they won that game, and they got a little complacent, especially Nayan Mongia. And once he got out, we were still sort of thinking, ‘That’s not going to happen, we are not going to win this game. Till the time Sachin is there, it’s not going to happen.'”

“The way he was batting, it was just out of this world. And then in the very next over, I think, to Saqlain Mushtaq, Sachin hit one in the air and that was it. That confidence, that belief started creeping in that now we will not allow them to get those 15-16 runs, whatever was required.”