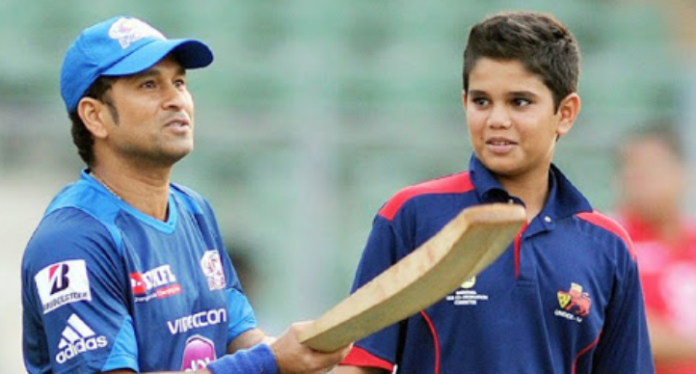 The image was accompanied by a funny caption, which shows the humorous side of the former India batsman. “When they tell you to baby sit…and you do so,” said Tendulkar.

Sachin Tendulkar looks quite young in the photo and is seen staring at the camera with a funky expression, as Arjun looks on. Fans expressed their happiness in the comments section, with some praising Tendulkar for his “superb pose” while others called it a “cute pic”.

When they tell you to baby sit…and you do so! 🤷🏻‍♂️😜 #ThrowbackThursday

Cricket commentator Harsha Bhogle posted a picture of this grouping on social media and asked, “How many of you can get all of them?” WV Raman, part of the India team at the time and in the picture, pointed out the players who were missing. “The missing ones are @sachin_rt and @vinodkambli349,” Raman commented on the post.

The missing ones are @sachin_rt and @vinodkambli349

Sachin Tendulkar was quick to notice that he was found missing and revealed his whereabouts with a picture where he is seen posing with Kambli, who is holding an umbrella.

The caption in Marathi translated to “We are here.”

When a journalist enquired about the occasion of such an emphatic coming together of stars, Raman recalled the occasion: “The broadcaster wanted to do an AV for the Independence day in 1993. We were leaving to SL around June /July.”