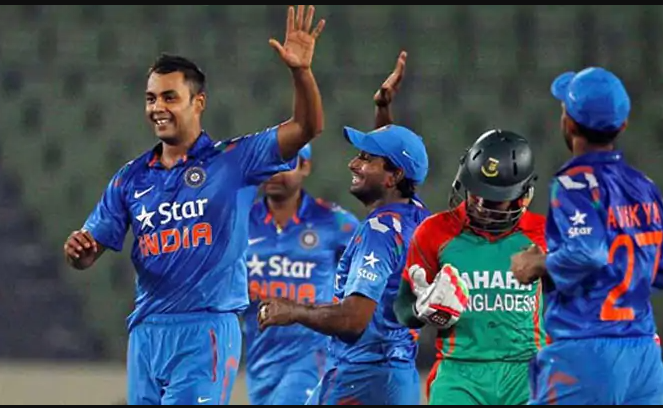 Stuart Binny’s brief stint in national colours resulted in a record-breaking performance that helped India register an unlikely win against Bangladesh on June 17, 2014.

Stuart Terence Roger Binny (born 3 June 1984) is an Indian international cricketer, who has played One Day Internationals, Twenty20 Internationals, and Tests. He played for the Rajasthan Royals in the Indian Premier League.

During their tour of Bangladesh in 2014, India had taken a 1-0 lead in their three-match ODI series against the hosts. The second match was interrupted by rain and eventually reduced to 41-overs-as-side contest.

India had rested MS Dhoni and Virat Kohli for the series.

Bangladesh captain Mushfiqur Rahim won a good toss and expectedly opted to bowl first to exploit the moisture on the pitch and bowling-friendly conditions. Mashrafe Mortaza struck with the second delivery of the match, trapping Ajinkya Rahane lbw for a first-ball duck.

India then crumbled to Taskin Ahmed’s pace as their innings lasted 25.3  overs for a mere 105. Taskin finished with 5/28 from eight overs while Mortaza took 2/35.

Captain Suresh Raina was their top-scorer with 27 off 23.

Chasing 106 off 246 deliveries wasn’t going to be challenging even on swing-friendly conditions.

However, India pacers responded in kind with Mohit Sharma (4/22) knocking off Bangladesh openers in his first two overs.

The duo had added 31 runs for the third wicket and Bangladesh seemed to have settled in nicely.

Enter Binny with his military pace.

In the blink of an eye, he ran through the Bangladesh batting order taking six wickets in just 28 deliveries as Bangladesh were shot out for 58.

Binny (6/4) broke legendary Anil Kumble’s record (6/12) for the best bowling figures by an Indian in ODIs.

India took an unassailable 2-0 lead with their 47-run win.