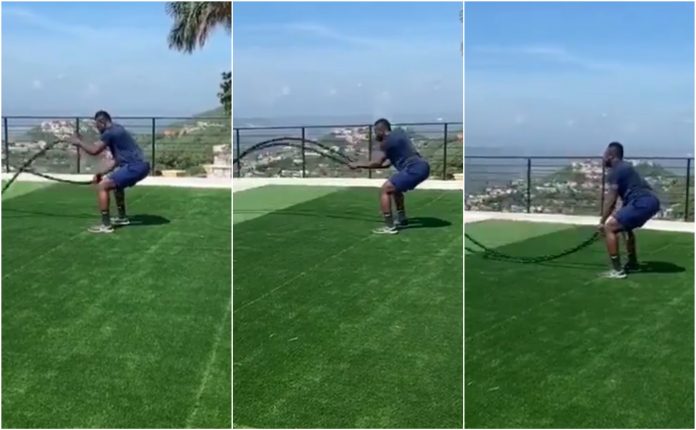 With no cricket occurring due to the coronavirus pandemic, most cricketers are talking with fans via social media or with individual cricketers, attempting to take advantage of their time staying inside. Kolkata Knight Riders all-rounder Andre Russell – known for his beast power and the capacity to engage fans has been occupied with attempting to keep occupied by working out.

In an ongoing video shared by the huge hitter, he gives us a brief look at his exercise system during this period. In the video, he utilizes a rope and shakes it to fortify his shoulders and back. This is a successful method of keeping the negativities around him under control and remaining fit.

Russell – who as of late turned into a dad – has been a vital piece of the KKR establishment and has in the past dominated matches without any help for his side.

In the meantime, the cash-rich Indian Premier League has been deferred inconclusively because of the pandemic. There are discussions of the T20 competition happening abroad this year, yet that looks exceptionally implausible. As indicated by reports, the Board of Control of Cricket in India is taking a gander at Sri Lanka and UAE as potential other options and a choice on that front is normal soon.

Russell Picks his Favorite Between IPL and CPL

The 32-year-old cricketer confessed that he gets the “most goosebumps” while playing in the IPL, even more than playing at home in the Caribbean Premier League (CPL).

“Let me confess something, IPL is where I get the most goosebumps. I get that in the CPL (Caribbean Premier League) as well, but when it comes to playing in the IPL, especially at Eden Gardens, there is no comparison to that crowd,” said Russell.

“When I walk out before facing a ball, the welcome I get is love, and yes it puts pressure on me. But it’s a good kind of pressure,” he added.

The batsman had made his IPL debut with Delhi Daredevils in 2012, but due to limited opportunities and injuries, he was restricted to a handful of games in the first two editions. Currently, he is one of the biggest stars of the league with KKR.