BBL 2020 Hobart Hurricanes vs Sydney Thunder Highlights: Both the team lock their horns to play the 31st league match of BBL 2020.

Khawaja and Hales get into the crease to lead Sydney Thunder. While Winter opens the bowling attack for the Hobart Hurricanes.

Hobart Hurricanes bowlers struggle to make the first breakthrough as the Thunder reached 57 runs for no wicket loss at the end of the 6 overs. D Arcy Short in the 7th over makes the first wicket for Hurricanes by dismissing Hales for 21 runs.

With back to back wickets, Sydney Thunder scored 74 runs for 3 wickets loss at the end of the 10 overs. D Arcy Short makes a massive wicket by dismissing Khawaja for 49 runs.

With another wicket fall, Sydney Thunder scored 167 runs for 5 wickets loss at the end of the 20 overs.

McDermott and D Arcy Short get into the crease to lead Hobart Hurricanes to chase 168 runs. While Arjun Nair opens the attack on behalf of Sydney Thunder.

Peter Handscomb and Dawid Malan join hands and lead Hobart for the second wicket partnership. At the end of the 10th over Hobart scored 77 runs for 2 wickets loss. Sydney Thunder seeks to break the partnership in order to restrict the run flow.

Chris Green in the 12th over dismissed Malan for 20 runs and breaks the partnership. Hobart Hurricanes start to lose wickets in back to back overs and lose all 8 wickets while scoring 128 runs.

At the end of 20 overs, Hobart Hurricanes scored 128 runs and lose the match by 39 runs. 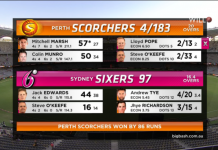 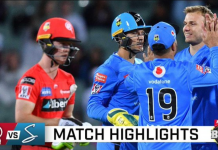 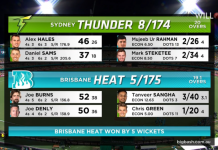 Shafali Verma continues to build her reputation as the next big thing in Indian...
Read more