Indian former cricketer VVS Laxman revealed that the series win by Team India against Australia made him emotional as he shed tears while watching Rishabh Pant and Washington Sundar bat.

Much like every Indian cricket fan, former batsman VVS Laxman shed tears while watching the epic encounter against Australia.

Speaking to Sports Today, the Test batting legend recalled how he shed tears watching India winning a series in Australia for the 2nd time in a row.

“There is no doubt about it. In fact, I became very emotional. I was watching the last day and following it along with my family. When Rishabh and Washington were batting, I got very tense myself because when you’re not playing the game, you’re not in control,” Laxman said.

“I just wanted India to beat Australia and win the series, especially after what has happened in Adelaide and what had happened before the Gabba Test match where everyone was talking about Indians are scared of going to Brisbane where Australia hadn’t lost in a long time,” he added.

Laxman further revealed that it was the 2nd time he cried while watching cricket – the first one was during India’s 2011 ODI World Cup win.

“Twice I cried, once in 2011 when India lifted the World Cup because I always wanted to be part of a World Cup-winning team and I played alongside this group of players who were so close to me and they went on to realise their dream of winning the World Cup,” Laxman said.

“And I always wanted to beat Australia in Australia, I was not able to do that as a cricketer. I was so proud that this young Indian did that. Tears came down my eyes. Words cannot express what a wonderful, inspirational achievement not only for cricket but for the entire country,” the former India batsman added.

India will now gear up for a four-match Test series at home against England. India and England will also play 3 ODIs and 5 T20Is. 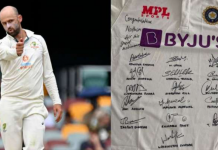