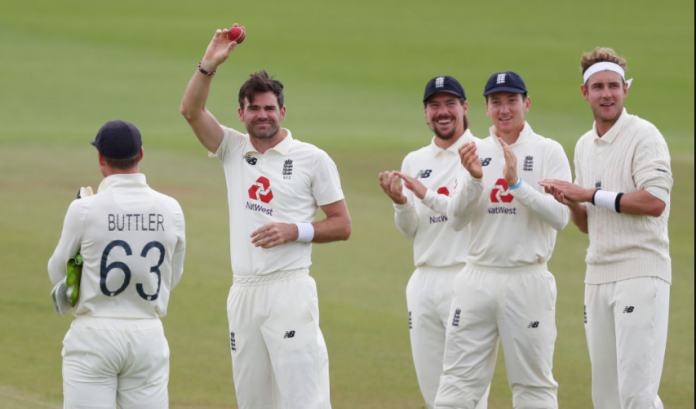 England paceman James Anderson became the first fast bowler to reach 600 wickets in Test cricket before the third and final Test against Pakistan finished as a draw, leaving the home side to celebrate a second series victory of the pandemic-disrupted summer.

Less than two hours of cricket were played on a rain-affected day five, with England taking just two of the eight wickets needed to win the match at the Rose Bowl after Pakistan resumed on 2-100 and trailing by 210 runs.

In 17 Years Career – Jimmy Anderson had bowled 33,717 deliveries and became the 4th bowler to get this milestone!#ENGvPAK #JamesAnderson pic.twitter.com/ImSwX6c3GG

The big consolation was Anderson took one of them, removing Pakistan captain Azhar Ali to join retired spinners Muttiah Muralitharan, Shane Warne and Anil Kumble in the “600 club” in Tests.

“It feels amazing,” said Anderson, a 38-year-old seamer who was playing in his 156th Test.

“I just absolutely love it. There is no better feeling for me than putting the boots on and doing what I love doing.”

James Anderson’s Stats Over a Period of Time

Stat Before Picking His 600th Wicket in Test Match

Stats of Fast Bowlers To Took Most Wickets in Test After Turning 30 Years:

Most Wickets By a Pacer in Test After Turning 30 Years

Anderson reached the milestone in his 156th Test match, over 17 years after he took his first wicket by bowling Zimbabwe batsman Mark Vermeulen on his Test debut at Lord’s in May 2003.