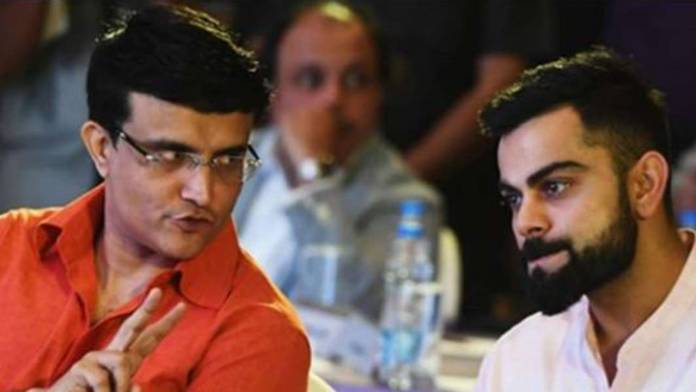 The change in India’s ODI captaincy had shaKohli vs Gangulyken the Indian cricketing fraternity to the core. More than the role change that took place, it was the manner in which the responsibility was taken away from Kohli and handed to Rohit Sharma that rose eyebrows.

Virat Kohli confirms that he will be available for the upcoming South Africa tour to play both ODI and Test series.

Notably, both Virat and Rohit Sharma are likely to miss playing the Test series together as Rohit Sharma has been ruled out of the SA test owing to an injury.

To give a conclusion for all the controversies Virat Kohli attended a press conference post his ODI captaincy removal and cleared the air. Following is the short overview of the interview regarding his captaincy removal issue:

Kohli on his communication with the BCCI

Virat Kohli (on removing him from ODI captaincy) said, “obviously we haven’t won an ICC tournament. I understand the logic behind why they took that decision”.

“When I told BCCI that I want to give up the T20I captaincy, it was accepted really well. There was no hesitancy. I was told that it was a progressive step”.

“I was informed at that time that I would like to lead in ODIs and Tests. The communication from my side was clear but I had also informed that if the office bearers and selectors don’t think I should lead in other formats then that is fine”.

In another interview, Sourav Ganguly revealed the reasons behind opting for Rohit Sharma in the leadership role. The BCCI President – a former Indian captain himself – said that Rohit has excellent credentials as captain in the limited-overs formats.

“Of course. That’s why the selectors have backed him (on whether he is hopeful of Rohit leading the squad successfully). He will find a way to do well and I hope he does,” Ganguly told News18.

“His record for IPL (Mumbai Indians) is phenomenal… winning five titles. He captained India in Asia Cup a couple of years ago which India won as well, and India won without Kohli. To win a title without him spoke volumes of that team’s strength. So he has had success in big tournaments. He has a good team. So hopefully they can all turn it around,” the BCCI President said.

Why Virat Removed from Captain Role?

Kohli, who has a 74.64% win rate as captain in the 50-over format, stated that he understood the reasons for Rohit taking over leadership duties of both white-ball teams while reiterating that there was no rift between two of India’s senior-most cricketers.

“Reasons…obviously we haven’t won ICC tournaments. The reasons, I can understand,” Kohli said.

“For me there was no debate in whether the decision was correct or not. The decision that BCCI has taken is from a logical point of view and completely understandable. I can understand. The other events on how it was communicated, I’ve already told you.”

Kohli on Controversy with Rohit Sharma

“I can understand the reasons. BCCI has taken the reasons from a logical point of view. There is no problem between me and Rohit Sharma. I have been clarifying for the past two years and I am tired. None of my actions or decisions will be to take the team down.”

Virat Kohli’s childhood coach Rajkumar Sharma expressed his displeasure over BCCI’s decision of stripping Virat Kohli from the ODI captaincy role. Notably, Virat announces that he will not lead RCB in IPL 2022 when the UAE leg of IPL 2021 kickstarted.