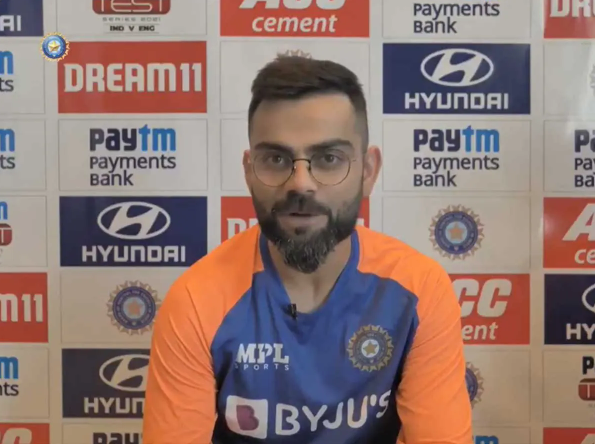 Virat Kohli Live Press Conference: Virat Kohli, the name has been on fire in social media with tons of controversies right after Rohit Sharma’s appointment as ODI skipper of team India.

Multiple reports suggest that Kohli pulled out of the upcoming ODI series against South Africa because he wanted to attend his daughter’s first birthday.

This will be the first press conference for Test Captain Kohli after being replaced as ODI Captain.

Virat Kohli on Jadeja’s Absence: We all know Jadeja’s quality and he will be missed. But we have enough bench strength. As much as we will miss him, I am sure that will not be a deciding factor.

Virat Kohli on ODI Captaincy: Before the selection call, I was told I won’t be the captain and I said okay. After the meeting, we had a brief chat and that’s it. I was not communicated at all.

Virat Kohli on No warm-up games: Match stimulation helps when situation is challenging for batting. As much as stimulation, getting in good shapes, cutting down easy singles

Virat Kohli on playing ODI series: I am available for selection for ODIs. Few things that came out in the past that I was attending events, things like those are not credible. I was contacted 1.5 hours before selection of the Test team and before ending the call, I was told by the 5 selectors that I won’t captain the ODI side.

“I was contacted one and a half hour before selection for Tests. The chief selector discussed with me the Test. Before the call ended I was told that the 5 selectors have decided that I won’t be ODI captain anymore. There was no prior communication about this.”

Kohli on Rohit’s absence from Tests: Kohli says “will miss Rohit’s experience” in SA Tests. With his experience and skill, we will miss his opportunity presence. But this also gives opportunities to new players to impress.

Kohli on not having much practise for SA tour: Nothing can derail me from being prepared for Team India. Things happening outside are not ideal and there things that we can do as an individual. I am very excited and eager to represent and lead the team in SA.

Kohli on ODI and T20i Captaincy: “I have been honest to my responsibilities. I have done the best to my abilities. About batting I think when you have done something for long and well, you know what you need to do to deliver.”

“The first thing I did was to approach the BCCI to leave T20I captaincy.. It was received really nicely, There was no offence. It was received as a progressive step, in the right direction I had told that I would like to lead India in Odis.”

Kohli on his communication with the BCCI: When I told BCCI that I want to give up T20I captaincy, it was accepted really well. There was no hesitancy. I was told that it was a progressive step.

I was informed at that time that I would like to lead in ODIs and Tests. The communication from my side was clear but I had also informed that if the office bearers and selectors don’t think I should lead in other formats then that is fine.

Earlier BCCI President Sourav Ganguly says that “I personally requested Virat Kohli to not step down from T20i captaincy”.

Kohli on Rohit Sharma and his leadership qualities: “My responsibility is to push the team in the right direction. Rohit is a very able captain and tactically very sound. Along with Rahul bhai, who is a great man-manager. They will get my 100 per cent support in ODIs and T20Is.”

Kohli on clarifying his stance and relationship with Rohit Sharma: “I can understand the reasons. BCCI has taken the reasons from a logical point of view. There is no problem between me and Rohit Sharma. I have been clarifying for the past two years and I am tired. None of my actions or decisions will be to take the team down.”

Notably, both Virat and Rohit Sharma are likely to miss playing together in the Test series as Rohit Sharma has been ruled out of the SA test series owing to an injury. Rohit Sharma is expected to return to the South Africa ODI series.

Australia Moves to the No.1 Spot in ICC Men’s Test Ranking