T20 World Cup 2021 Schedule – ICC announced the schedule for the most awaited event of the year 2021. The ICC T20 WC has been initially planned to host by BCCI in India in 2021 but owing to the COVID19 pandemic situation BCCI plans to host the T20 WC in UAE.

In order not to skip the major event of the year BCCI plans to host the ICC T20 World Cup in UAE. Earlier BCCI President Ganguly explained the reason why BCCI moves ICC T20WC to UAE.

ICC releases the warmup match schedule for the upcoming T20 World Cup 2021. Four sets of matches are played on two separate dates with a single day of rest.

These matches are played along withside of the round 1 matches. All warm-up matches of team India will be telecast on Star Sports network. Check out the ICC T20 World Cup 2021 warmup match schedule:

Those A1, A2, and B1, B2 were the teams qualified from the first round. The top two teams from each group advance to the semi-finals

The two semi-finals of the T20 World Cup 2021 Schedule are to play on 10th and 11th November respectively. The 2 semi-finals have a couple of reserve days before the finals.

The finals of the ICC T20 World Cup 2021 Schedule to play on 14th November 2021. The 15th of November(Monday) has been announced as the reserve day for the finals.

The remaining 4 teams will be selected through the qualifier stage of T20 World Cup 2021 schedule will take place from October 17 to October 22 and in total 8 teams will be fighting to get the remaining 4 slots in the Super12s. The Top 2 teams of each group from the points table will move to Super Twelve.

The first-ever T20 world cup was hosted by India where the hosts took the maiden trophy under Indian former skipper MS Dhoni’s captaincy. Look at the T20 WC winner’s list till date:

Star Sports have the official broadcasting rights of T20 World Cup 2021 while Hotstar+Disney has the online streaming rights in India and its subcontinents. Alternate TV broadcasters and Online streaming platforms were partnered by Star Sports for the countries where these two can’t provide the service

Can we watch 2021 T20 World Cup live for free? Here we will discuss the possibilities of such cases:

Apart from subscribing to Disney+Hotstar Indian telecommunication service providers made some additional compliments in their recharge pack which allows us to view the Hotstar contents. Check out the following details to watch T20 World Cup 2021 live for free:

Airtel offers combos that come bundled with Disney Plus Hotstar VIP subscription, using which you can watch T20 World Cup 2021 matches live on your mobile.

Check out the Airtel plans that come bundled with Disney Plus Hotstar VIP subscription for live streaming the T20 World Cup 2021 edition on your smart TV, mobile or laptop.

Sky Sports have the right in the United Kingdom(UK) to telecast the upcoming T20 World Cup Live.

The official anthem for the ICC T20 World Cup 2021 Schedule to be held in the United Arab Emirates (UAE) and Oman from October 17 to November 14, was launched by the International Cricket Council (ICC) on Thursday in collaboration with its broadcast partners Star Sports.

All fans wishing to attend matches must follow all COVID 19 protocols laid out on www.t20worldcup.com/tickets/biosecurity-measures and note the different stadium entry guidelines which will be updated in real-time as per the latest government mandates.

As T20 World Cup plays in 4 different venues, user have to pick the venue in which he/she wants to book the ticket(users may place in the queue in prior to book tickets owing to high demand).

Other team matches: half of the price of Indian matches 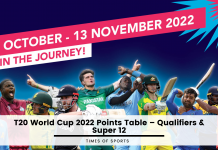