Bangladesh T20I captain Mahmudullah has announced his retirement from Test cricket where BCB confirmed on November 24.

Mahmudullah made his Test debut on 9 July 2009 against the West Indies and made a dream start to his career in whites. He failed with the bat but produced the best bowling figures for a Bangladeshi on debut.

He took 8 wickets in the match, including a 5-wicket haul in the second innings to help Bangladesh seal their first-ever win abroad.

Mahmudullah also led Bangladesh in one Test victory out of the six matches he captained, mostly in the absence of Shakib Al Hasan, since 2018.

Mahmudullah, who made a comeback to the Test format earlier this year in Zimbabwe, had already informed his teammates that he won’t be extending his career in the longest format following his career-best 150* against the African nation in Bangladesh’s 220-run win.

In a statement, Mahmud Ullah said: “Leaving a format of which I have been a part of for such a long time is not easy. I had always thought of going on a high and I believe this is the right time to end my Test career.

“I want to extend my gratitude to the BCB President for supporting me when I returned to the Test team. I thank my teammates and the support staff for always encouraging me and believing in my ability. It has been an absolute honour and privilege to play Test cricket for Bangladesh and I will cherish the many memories.

“Although I am retiring from Tests, I will still be playing ODIs and T20 internationals and really looking forward to continue giving my best for my country in white-ball cricket.” 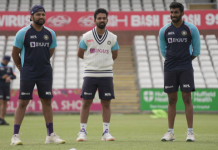