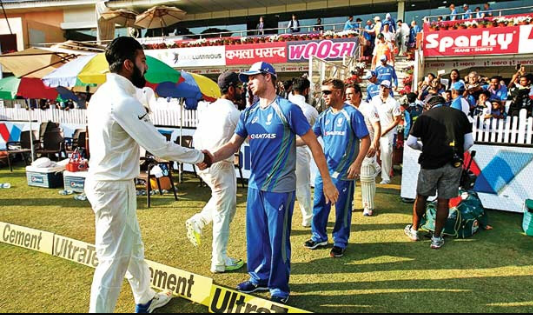 K.L. Rahul is the Indian batsman who has impressed Steve Smith the most, the prolific Australian cricketer has said.

Smith was answering his fans on Instagram and when asked about which player has impressed him the most, the ace batsman said: “KL Rahul. Very good player!”

The former Australian skipper also said he cannot wait for India’s proposed tour later this year, which he expects to be an “awesome” series.

The first Test of the much-anticipated Border Gavaskar Trophy is scheduled to be played at Gabba followed by matches at Adelaide Oval, MCG and the SCG starting December 3.

Dhoni as “legend” and  Virat Kohli is a “freak” : Smith

Smith also rated Ravindra Jadeja as the best fielder going around and termed M.S. Dhoni as “legend”. Smith said Virat Kohli is a “freak” when it comes to batting ability.

Rating the 2015 World Cup win as his best moment so far, Smith also picked his 144 at Birmingham in the first Ashes Test as his favourite Test knock till date.

He added he loved watching Mark Waugh play and when quizzed for a batting tip, he said: “Know how you want to play watching the ball as close and as late as possible.”

Smith also said the Indian Premier League (IPL) is his favourite tournament. “Tough to beat the IPL. Playing with and against the best players from around the world.”

The Australian batter also spoke on Pakistan batting sensation Babar Azam, saying the recently appointed ODI captain has a lot of time when he is batting.

“Very good player, he has a lot of time when he is batting.”

Smith also said Rahul Dravid is a perfect gentleman and “a seriously good player.” Mohammad Amir is the most skillful bowler Smith said he has faced.