Virat Kohli-led Royal Challengers Bangalore (RCB) has only 6.4 crores left in their purse value for the IPL 2021 Auction. The BCCI has reportedly given the deadline of January 20 for the franchises to submit the list of players who have been retained and released. While the IPL 2021 will hold the auction on February 11.

Royal Challengers Bangalore(RCB) starts the IPL 2020 campaign with impressive performance and failed to long last with it. SRH beat RCB in the eliminator match of IPL 2020 and kicked RCB out of IPL 2020.

RCB who still waits for their maiden IPL trophy will make crucial changes in the upcoming IPL 2021. TOS listed the possible players to release or to retain by the RCB ahead of IPL 2021.

RCB needs to strengthen both batting and bowling order to make a fulfilled squad ahead of IPL 2021. With a lot of expectations in the bowling department, Steyn failed to show up in IPL 2020. Dale Steyn and Umesh Yadav all had economy rates in excess of 10.

Moeen Ali hit the top of the list after his run-out in a free hit delivery. While Dale Steyn announced his unavailability for the IPL 2021 he too joins the list of players who will not play for RCB in IPL 2021.

Undoubtfully RCB will retain its skipper Virat Kohli and key player Ab de Villiers. With an outstanding performance in the IPL 2020, Devdutt Padikkal will retain his spot in the RCB squad.

RCB will retain it’s key spin bowler Yuzvendra Chahal ahead of IPL 2021. In addition to this RCB might look to retain Mohammed Siraj, Navdeep Saini, and Washington Sundar.

Though Padikkal emerges as the best choice for opening RCB still needs to look after another opening batsman if they release Finch from their squad. Jason Roy will be the possible replacement for Finch to open with Padikkal.

With only ABD as the power hitter in the lower order RCB might show interest to rope Carlos Brathwaite.

For Steyn’s replacement, RCB will look to rope Sreesanth or Mitchell Starc, or Mustafizur Rahman. Sreesanth who currently plays in Syed Mushtaq Ali Trophy will expect to make his comeback in IPL 2021. RCB will look for an international standard bowling experience to replace Steyn.

All the three players tick the boxes of requirement eventually. Notably, Sreesanth has experience of playing in the 2007 T20 WC and 2011 WC winning team which increase his possibilities.

If RCB seeks for Steyn’s replica then the left-arm pace bowler Mitchell Starc would be the best replacement. Starc is well known for yorkers and to deceive the batsmen with tricky deliveries. 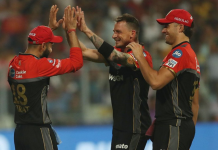 BCCI Announced the Schedule for the England tour of India 2021 to play 4...
Read more