Rajasthan Royals all-rounder Ben Stokes has been ruled out of the ongoing IPL 2021 owing to a broken finger which occurred during a low dive catch while fielding against Punjab Kings.

During this effort RR’s all-rounder, Ben stokes hurt himself with a finger fracture and continued to complete the match. Post the match RR officially announced the news of Ben stokes unavailability for the season.

The Royals said in a statement on Tuesday that after Stokes picked up the injury, “subsequent investigations revealed that he sustained a broken finger, which will, unfortunately, rule him out of the remainder of the Indian Premier League 2021 season”.

“Everyone at Rajasthan Royals absolutely admires Ben for being such a huge asset and a valuable member of the Royals family, both on and off the field, and wishes him a speedy recovery,” the statement further read.

Rajasthan Royals also announced that Stokes has decided to stay with the team and they will soon look for a replacement for the England all-rounder.

“We are delighted that Ben would like to stay with the group to provide his valued support and inputs off the field. In the meantime, we will be reviewing potential replacement options for the remainder of the season,” the official statement read.

Ben Stokes has been ruled out of the IPL following a broken finger in last night’s game. 😔

He will stay with the Royals and support the rest of the group in the upcoming matches. 💗#RoyalsFamily | @benstokes38 pic.twitter.com/WVUIFmPLMJ

In the match against the Kings, Stokes had bowled the eighth over but didn’t come on to bowl anymore even though the Kings scored 221 for 6.

He subsequently came out to open the innings for the Royals but lasted only three balls before top-edging a pullback to the bowler Mohammed Shami to be out for a duck. The Royals lost the match by four runs.

Without either Stokes or Archer, the overseas options for the Royals are limited. Both Jos Buttler and Chris Morris are first-choice picks, and for the other two slots, they have to choose from among Liam Livingstone, David Miller, Mustafizur Rahman, and Andrew Tye.

Rahman played in the first match and Livingstone – who can bat in the top order and turn his arm over for part-time off-spin – could be the most likely to fill in for Stokes. 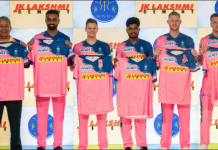