BBL 2020 Melbourne Stars vs Hobart Hurricanes Highlights: Both the team lock their horns to play the 27th league match of BBL 2020. Melbourne Stars need to win the match in order to secure a safe spot in the BBL 2020 points table.

Nick Larkin then join hands with Stoinis for the first wicket and expected to make an impressive partnership. Riley Meredith in the last delivery of the 5th over makes another blow by dismissing Larkin for 4 runs.

Marcus Stoinis and Nicholas Pooran join hands and make the must needed partnership. In the mid of the 12th over Stoinis reached his 14th BBL half-century. In the followed over the duo smashes a massive 21 runs off the single over and poses threat over the bowling unit.

In the followed over Nathan Ellis dismissed Pooran for 26 runs and breaks the partnership. At the end of the 15th over Melbourne Stars scored 120 runs for 4 wickets loss. The opening batsman Stoinis stands unbeaten throughout the innings by scoring 97 runs from just 55 deliveries.

At the end of the 20 overs, Melbourne Stars scored 183 runs for 6 wickets loss.

McDermott and D Arcy Short gert into lead Hobart Hurricanes to chase down the massive target of 184 runs. Rainbird opens the attack on behalf of Melbourne Stars.

Melbourne Stars needs to pick the early wickets in order to restrict Hobart Hurricanes to make a massive run chase partnership. Rainbird in the 5th over makes the first blow for Hobart Hurricanes by dismissing D Arcy Short for 8 runs.

Melbourne Stars gets in pressure to break the partnership. Zampa in the mid of the 13th over dismissed Malan for 26 runs and breaks the partnership. Liam Hatchermakes the 17th over as expensive by letting Hobart Hurricanes to score 17 runs off the over.

In the followed over Stanlake dismissed Ingram and breaks the dangerous partnership. Liam Hatcher again in the 19th over dismissed McDermott for 91 runs who played in his peak form.

Without McDermott, Hobart Hurricanes lost the match by 10 runs. 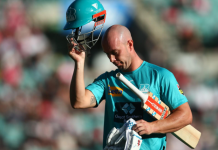