After the lose against England in super over match Australia’s Alyssa Healy and Beth Mooney get in the crease, Alyssa Healy  return to dressing room as usual scoring in single digit. It has been a poor T20I Tri series for Healy. After a couple of overs England lose its key player Ashleigh Gardner for 10 off 12 balls. Beth Mooney and captain Meg Lanning join hands and grasp  score for the team. Lanning leaves the crease when she scored 12 off 16.

With single-digit scores in all the games, it has been a poor T20I tri-series for Alyssa Healy so far.pic.twitter.com/OOiCuHuKZz#AUSvEng

Beth Mooney dragged Australia towards the 132

Though England lose its wicket consistently, Beth Mooney with her aggressive strike score a half century. After Lanning, the well expected  all-rounder Ellyse Perry get in the crease, but soon return to pavilion when she scored 10 off 12 delivery. Rachael Haynes’s 24 from 21 and Beth Mooney’s 50 from 40 drags Australia to a descent score of 132. Sophie Ecclestone and Sarah Glenn took 2 wickets each that controlls the Australian total.

With a total of 132 to chase down Jones and Wyatt get in the pitch. Both the team execute their best play to get their seat in finals. England starts with a keen to win this match against Australia,but in the Tayla Vlaeminck spell Wyatt got out with a score of 11 from 17. England’s best performer Heather Knight fails(13 off 16) to show off and return to pavilion when Sophie Molineux uproot her wicket. England players can’t able to with stand the bowling attack from Australia thus it suppress England team to score as per the required run rate. Australian women’s team defeat the England women’s with a difference of 16 runs.

After the Australian’s win over the England women’s with their improved bowling and fielding performance, the host paved their way for the finals. Where they clash with the India women’s team on February 12 2020. 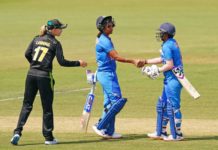