A year out from the ICC T20 World Cup in Australia, Southern Stars wicketkeeper Alyssa Healy has set a new world record for the highest catch of a cricket ball.

As per the records, the previous record for highest catch of a cricket ball is 62 Metres which was set by Kristan Baumgartner in the United Kingdom in 2016. Nearly on the same year, former England Cricket Captain Nasser Hussain set the previous mark of 49 Metres.

The plan is to send the drone up holding the ball and drop it from the particular height. The Official Attempt started with 64 Metres as an initial mark. Alyssa Healy doesn’t carry ball on her first attempt, the ball left his gloves on finger tips. But she got it right on her second attempt.

Next them aim to challenge the height of 70 Metres. She just got the catch perfectly on the first attempt and makes it look so easy.

But again she wanted to challenge the height of 80 Metres which will the height of stadium lights. We know that it’s not so easy to catch a ball from that height and the variation will be more compared to the previous heights.

Unfortunately, everyone was excited to see the first attempt and she misjudged the ball and left it on finger tips. That should have hurted her bad but she want to try it again. She is ready and ball is not at 80 metres top.

In the second attempt for a 80 Metres Catch, she again dropped it and got bit disappointed. As there are only 3 valid attempts allowed on Guinness World Record break and she is ready to get her final attempt for a 80 metre catch.

Finally, she got it well on the final attempt and breaks the Guinness World Record by catching a Cricket Ball from 82.5 Metres. 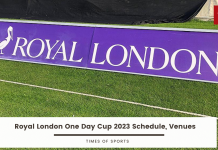