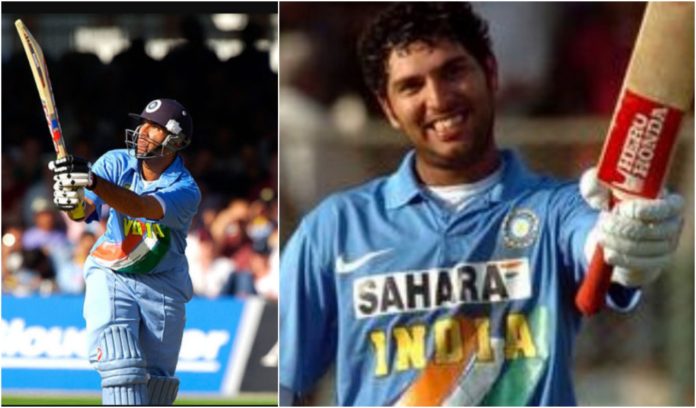 On this day in 2006, former India all-rounder Yuvraj Singh smashed his seventh ODI century to win the 12th of his 27 ‘Man of the Match’ awards in ODIs.

Yuvraj’s quickfire hundred in the third ODI of England’s tour of India in 2006 propelled India to a magnificent 3-0 lead in the seven-match series. In what was the left-handed batsman’s second ODI at the Nehru Stadium in Margao, he improved his numbers by crossing the three-figure mark.

After the then India captain Rahul Dravid won the toss and opted to bat, Yuvraj came in to bat at No. 4 in the 23rd over. While Yuvraj seemed to have come in to bat in a comfortable position, it didn’t remain the same as India lost Irfan Pathan (36) and Mohammad Kaif (0) in quick succession.

Also Read : “IPL offers big money and it takes away the focus from the youngsters” : Yuvraj Singh

Yuvraj then shared a 142-run partnership for the fifth wicket alongside Suresh Raina (61) as India scored an above par 294/6 in their allotted quota of 50 overs.

It was on the last delivery of the 39th over that the southpaw completed his half-century off 48 deliveries. Having got his eye in, Yuvraj started to take English bowlers to the cleaners with his aggressive approach.

On the last delivery of the 47th over, Yuvraj ran a single off England pacer James Anderson to complete a 73-ball hundred. Before getting out to England captain Andrew Flintoff, Yuvraj ended up scoring 103 (76) with the help of 10 fours and three sixes.

Pathan, who opened the bowling alongside Munaf Patel, registered bowling figures of 10-0-51-4 which saw him play a crucial role in bundling out the opposition for 245 in 48.5 overs. Despite all-rounder Paul Collingwood scoring 93 (84), the visitors ended up losing the match by 49 runs.

Indian cricketers Yuvraj Singh and Harbhajan Singh have unleashed a social media storm by backing former Pakistan captain Shahid Afridi’s foundation in its fight against the coronavirus pandemic. The two countries are bitter rivals and the move touched a raw nerve in India. Afridi’s appeal for donations to help people affected by the deadly virus in Pakistan has had overwhelming support from leading cricketers. Harbhajan urged people to contribute in a video message, and called on other cricketers in the two countries to make similar appeals.