Washington Sundar becomes the third player to be ruled out of the upcoming T20I series against West Indies. It is learned that Sundar will require a few weeks to recover from his long-term injury.

At the IPL 2022 mega auction on Saturday, Sundar was purchased by Sunrisers Hyderabad for an impressive Rs 8.75 crore.

CHECK All 10 Teams Full IPL Squad along with roles and auction price details.

According to a report by Cricbuzz, Sundar has suffered a Grade 1 hamstring injury. A Tamil Nadu Cricket Association (TNCA) official told Cricbuzz that Sundar will report to the National Cricket Academy (NCA) in Bengaluru on Tuesday. He is expected to spend three weeks at NCA which could mean he missed the upcoming series against Sri Lanka too.

“Washington Sundar suffered a left hamstring muscle strain during fielding in the third ODI,” said a statement from BCCI. Kuldeep Yadav has been named as his replacement.

Sundar had made his comeback to the Indian team after 11 months earlier this month in the ODI series against West Indies after being out of action due to a finger injury he suffered during India’s tour of England in 2021.

He missed the second half of the 2021 Indian Premier League (IPL) and also the men’s T20I World Cup in the UAE. His comeback was delayed after testing positive for COVID-19 before the tour to South Africa.

Sundar left the Indian camp that is currently in Kolkata. The Indian team had a net session at Eden Gardens in Kolkata on Monday (February 14) evening.

Sundar (22) is the third player to be out of the Twenty20 series against West Indies after vice-captain KL Rahul and all-rounder Axar Patel.

While Rahul sustained an upper left hamstring strain during fielding in the 2nd ODI (vs West Indies) on February 9, Axar has resumed the final stage of his rehabilitation after recently recovering from Covid-19, the BCCI said.

“They will now head to the National Cricket Academy in Bengaluru for further management of their injury,” the BCCI said recently adding “The All-India Senior Selection Committee has named Ruturaj Gaikwad and Deepak Hooda as replacements.” 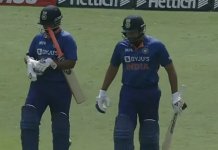