Fielding coach R Sridhar has opened up about how Ravi Shastri pep talks that paved the way for the Virat Kohli-less side to bounce back after the infamous 36 all-out defeat at the hands of the mighty Aussies in the recently concluded Border-Gavaskar Trophy.

The long-serving fielding coach has revealed what Shastri told the crestfallen side after they were bundled out for 36 – their lowest-ever innings total in the longest format.

In a youtube show conducted by R Ashwin, India’s fielding coach explains how Ravi Shastri bundled up team India together after the 1st Test loss.

India lost the Test match in a humiliating manner and with a barrage of criticism that came their way in its immediate aftermath, the side could have easily fallen away.

But this is where the man-management skills of Ravi Shastri came to the fore. According to R Sridhar, a day after the shambolic defeat, Shastri gatherer the entire team and urged them to wear 36 like a badge of honor.

“After 36 all-out, you didn’t know what’s next. Then Ravi (Shastri) bhai gathered the team and said: ‘Wear this 36 like a badge on your sleeves and you will be a great team’,” Sridhar told news agency PTI.

Watch the full episode of Ashwin and Sridhar’s chat

The Rahane-led unit turned the tables on Australia, a week later when they routed the hosts by eight wickets in the Boxing Day Test to level the rubber 1-1.

The tourists then proceeded to pull out a draw for the ages in Sydney to ensure that we went into the final Test with the series locked at 1-1.

Then in Brisbane, the ultimate miracle happened as a heavily depleted Team India shocked the Aussies to not only chase down a record fourth-innings total of 328 at the venue but also breach the fortress after a period of 33 years to clinch their second consecutive Test series win Down Under. 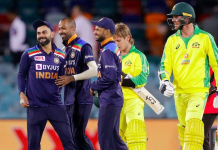